A United Nations advocacy group comprising eminent persons from the private sector, academia, governments and civil society called today for intensifying efforts to achieve the anti-poverty targets known as the Millennium Development Goals (MDGs) in the run-up to their 2015 deadline.

With the 2015 deadline fast approaching, the MDG Advocacy Group used their meeting on the sidelines of the high-level debate of the 67th General Assembly to urge the international community to step up efforts for the final three years.

Although several targets have been met ahead of schedule, including on poverty reduction, water access, slum improvement and gender parity in primary education, enormous challenges remain.

More than one billion people are still living in extreme poverty and approximately 61 million children of primary school age are out of school. Progress has been uneven within countries and regions and severe inequalities persist.

“Achieving the MDGs is challenging but possible,” said Prime Minister Julia Gillard of Australia, co-chair of the Group. “We have seen what can be accomplished when the international community works together – we have made real progress towards the MDGs. But we still have a lot to do. And we are running out of time.”

Co-chair and President of Rwanda Paul Kagame warned against losing focus following the recent global economic downturn, which has slowed progress towards the MDGs.

“We need to be innovative and find ways to do more with limited resources, and scale up what has been seen to work over the last decade,” he said. “We must ensure the most vulnerable are not left behind.”

The Group was established by Secretary-General Ban Ki-moon in 2010 to help him build political will and mobilize global action for the benefit of the poor and the most vulnerable.

“This is no time to relax. 2015 is fast approaching,” Mr. Ban told the Group today. “We can and must continue to push as hard as we can to build on the momentum the Goals have generated.”

He added that the Group is an “inspiring” example of partnership – a model for approaching development challenges. “Governments stand at the centre. But we know that governments alone cannot get the job done. It will take the private sector, civil society, philanthropists and academia – working together in common cause, catalyzing commitments and promoting accountability.”

The 2012 MDG Gap Task Force Report, released last week, stated that dwindling development aid risks slowing the momentum toward achieving the Goals. However, meeting the remaining targets on time is possible as long as governments do not waiver from their commitments made over a decade ago and international support is adequate, it added.

At a separate event today on the MDGs, Helen Clark, Administrator of the UN Development Programme (UNDP), said that more effort is needed to sustain the gains made and reach those still untouched by the progress achieved so far.

She added that overburdened and ill-equipped institutions, neglected agricultural sectors, poor or absent sanitation and energy services, chronic malnutrition, and discrimination against women, girls, and other groups remain huge barriers to MDG progress in many countries. 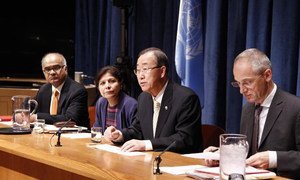 Secretary-General Ban Ki-moon today urged a stronger global partnership to advance progress on the development targets world leaders have pledged to achieve by 2015, as a new United Nations report finds that significant gains risk slowing due to declining aid.