African leaders at UN call for accelerating response to HIV/AIDS

African leaders meeting on the sidelines of the 67th session of the United Nations General Assembly called today for innovative solutions to accelerate the response to AIDS, tuberculosis and malaria and to advance health for people on the continent.

At their meeting at UN Headquarters, the leaders discussed the African Union (AU) Roadmap, which outlines long-term sustainable strategies to finance and provide access to HIV treatment and prevention services and other health services in Africa as called for in the Millennium Development Goals (MDGs).

The Goals – or MDGs, as they are commonly known – were agreed by world leaders at a UN summit in 2000 and set specific targets on HIV/AIDS, in addition to poverty alleviation, education, gender equality, child and maternal health, environmental stability, and a ‘Global Partnership for Development.’ The target date for achieving them is 2015.

There are nearly 23.5 million people living with HIV in Africa, the region most affected by the epidemic, according to the Joint UN Programme on HIV/AIDS (UNAIDS). New HIV infections in the region have declined by 22 per cent since 2001.

By the end of 2011, an estimated 56 per cent of people eligible for HIV treatment in sub-Saharan Africa were accessing it – with treatment coverage increasing by 22 per cent across the region between 2010 and 2011.

Leaders echoed the need for strong political leadership and enhanced country ownership and, as a first step, agreed to accelerate the implementation of the Roadmap, according to a news release issued by UNAIDS.

“Africa has not only shown that it cares but that it has increased its capacity to provide health care for its people. Millions of lives have been saved as investments into healthcare have increased – both domestic and international,” said the agency’s Executive Director, Michel Sidibé, who moderated the discussion.

“For every African to realize their right to health, a new paradigm of sustainable health services has to be put in place. For this we must secure the investments needed, secure good laws, secure the science, secure shared responsibility and global solidarity as well as secure access to lifesaving health services,” he stated.

Data released this year by UNAIDS shows that scientific advances and improved programme practices have helped to reduce the number of new HIV infections and AIDS-related deaths. Life-saving HIV treatment is now reaching more than 8 million people around the world – more than 6 million of which are in Africa.

The President of Benin, Boni Yayi, speaking in his capacity as Chairperson of the AU, noted that 10 years after the adoption of the Abuja Declaration on HIV/AIDS, Tuberculosis and Other Related Infectious Diseases, millions of lives have been saved and Africa has prospered.

“These foundations have to be made permanent for this generation and for all our future generations,” he added.

While domestic investments for health have increased, the majority of countries have not yet met the Abuja target of allocating 15 per cent of government budget to health. Leaders at the meeting agreed that this goal should be maintained and all efforts be taken to achieve this target.

Given that a majority of Africa’s pharmaceutical needs are met through imports, the need to boost local capacity to manufacture essential quality-assured medicines as well as developing regional markets for them was also highlighted at the meeting.

In a related development, the health of thousands of mothers and children in North Africa and the Middle East will receive a boost with a new initiative aimed at the elimination of mother-to-child transmission of HIV.

The regional initiative, which is part of a larger global approach to combating HIV supported by the UN World Health Organization (WHO) and the UN Children’s Fund (UNICEF), will be launched in the Egyptian capital, Cairo, on 2 October. 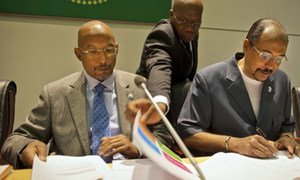 The United Nations has teamed up with the New Partnership for Africa’s Development (NEPAD) Agency to advance sustainable responses to HIV/AIDS, health and development across the continent.