United Nations Secretary-General Ban Ki-moon today called for urgent international support for the people and governments of West Africa’s Sahel region, warning that the area is at a critical juncture with 18 million people affected by a severe food crisis.

“Political turmoil, extreme climatic conditions and fragile economies are combining to create a perfect storm of vulnerability,” he told a High-Level Meeting on the Sahel held on the margins of the 67th UN General Assembly.

The Sahel region is currently facing a swathe of problems, which are not only political but also involve security, humanitarian resilience and human rights.

In addition to political turmoil and insecurity in Mali, the region also suffers from extreme poverty, with human development levels among the lowest in the world, porous borders that present significant security challenges, as well as human rights problems.

“Terrorist groups, transnational criminal organizations and insurgencies threaten peace and prosperity,” Mr. Ban said. “There is a particularly disturbing rise in extremism, and human rights abuses are prevalent. Human trafficking is on the rise, along with drug trafficking and arms smuggling.”

At the same time, development is under threat, with environmental shocks such as floods, droughts and locust swarms, combined with global food price volatility, eroding resilience, he added.

Mr. Ban noted that instability in northern Mali, where Islamic militants have seized control, has caused more than 260,000 refugees to flee to neighbouring countries, further straining the already fragile social and economic infrastructure.

But he cautioned that any proposed military solution to the security crisis in northern Mali should be considered extremely carefully. “This could have significant humanitarian consequences, including further displacement and restrictions on humanitarian access,” he stressed.

In July, the Security Council requested the Secretary-General to develop an integrated regional strategy for the Sahel, encompassing security, governance, development, human rights and humanitarian dimensions.

Mr. Ban said the UN is developing an Integrated Regional Strategy on the Sahel that will strengthen regional capacities to combat insecurity, prevent and respond to large-scale crises, and promote democratic governance and respect for human rights.

The strategy will help countries of the Sahel to stem the terrorist threat, fight organized crime and control the proliferation of weapons. This will include tackling money laundering and improving border management.

It will also promote inclusiveness, conciliation and mediation to decrease tensions within and between countries, seek to strengthen the short- and long-term ability of communities to cope with extreme climatic conditions and market shocks, and place great emphasis on environmental management.

Participants at the meeting, according to a chairman’s summary, reaffirmed their commitment to assist and support the people of the Sahel, including through the integrated strategy and through mechanisms already in place.

“The participants welcomed the regional nature of the strategy while anchored in national ownership, highlighting that the onus for solving the crisis in the Sahel, and in particular, promoting democratic governance, rested with the governments of the region.” They also welcomed the Secretary-General’s intention to appoint a Special Envoy for the Sahel.

On Mali, participants called for a clear transitional roadmap leading to a resolution of the conflict in the north and the holding of elections as soon as possible. 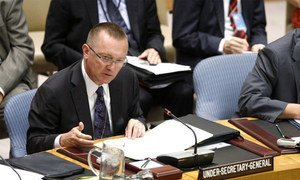 The top United Nations political official today called on the Security Council and the wider international community to support efforts to develop an integrated strategy to tackle the challenges in the Sahel region of West Africa, which are not only political but also involve security, humanitarian resilience and human rights.