26 September 2012
Addressing the United Nations General Assembly, Yemen’s President Abdrabu Mansour Hadi today appealed to Heads of State and Government for more help in combating terrorism in his country where he said that Al-Qaida, although weaker, is still capable of desperate acts.

“We invite our international partners in combating terrorism to provide more logistical and technical support to the security forces and counterterrorism units and expand the intelligence cooperation and coordination in this field,” President Mansour told the 67th General Assembly on the second day of its annual General Debate.

“We reaffirm our commitment to eradicate terrorist elements,” he added.

He said Al-Qaida was much weaker following defeats at the hands of the Yemeni armed forces and local committees, but noted that “we cannot underestimate the desperate acts of Al-Qaida. Due to not being able to adapt with the successive defeats, Al Qaida converted its members into explosive belts and time-bombs against innocent people.”

President Mansour also noted that the UN appeal for $600 million to support over 500,000 villagers displaced by the fighting, as well as an increasing number of refugees from Somalia and Ethiopia, was only half funded and he appealed to friendly countries to make up the shortfall.

Turning to the Middle East, the Yemeni leader deplored that the Palestinian people are subject to a “gruesome escalation of Israeli violence.”

“Israeli settlements are expanding, innocent Palestinians are maimed, activists are besieged, prisoners and detainees are oppressed and the attempts of the Israeli side to demolish the Aqsa mosque (Islam’s third holiest site) are continuing,” he said.

“This requires a stronger role and a closer and more effective presence for the United Nations and its agencies against the Israeli arrogance and disobedience to international community resolutions and its refusal of all peaceful proposals and initiatives,” he added, calling the lack of international pressure on Israel “a key failure in international justice standards.”

Referring to the recent anti-Islam video made in the United States – and which has sparked deadly violence in numerous Arab and Islamic countries, President Mansour rejected the defence that it was permissible under the doctrine of freedom of speech.

“There should be limits for the freedom of expression especially if such freedom blasphemes the beliefs of nations and defames their figures,” he said, while also calling for adherence to peaceful expressions of opinion, denouncing violence and incitement of hatred, which, he said, is contradictory to the values of the true Islamic religion.

In addition to President Manour, scores of the world’s heads of State and government and other high-level officials are presenting their views and comments on issues of individual national and international relevance at the Assembly’s General Debate, which ends on 1 October. 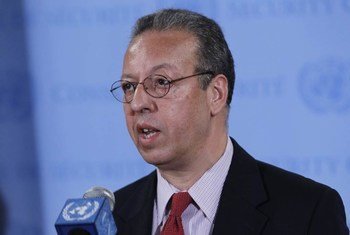 18 September 2012
Yemen’s democratic transition is on track but faces serious challenges, the United Nations envoy for the country said today, noting that it is vital to proceed with the re-structuring of the armed forces and the all-inclusive national dialogue.