25 September 2012
On the margins of the United Nations General Assembly’s high-level debate today, Secretary-General Ban Ki-moon discussed a range of international issues, particularly the crisis in Syria, as well as bilateral issues, with Heads of State and Government and foreign ministers attending the gathering.

The deteriorating situation in Syria – where more than 18,000 people, mostly civilians, have died since the uprising against President Bashar al-Assad began some18 months ago and around 2.5 million Syrians urgently need humanitarian aid – was a key topic of discussion in Mr. Ban’s meeting with the President of Egypt, Mohamed Morsy.

The Secretary-General expressed his concern over the deadlocked situation in Syria, as well as its regional implications, and both men underlined the need for the international community to take action before the death toll rises higher.

They also exchanged views on the Arab Spring and the deteriorating situation in the occupied Palestinian territory.

In his meeting with the Prime Minister of Italy, Mario Monti, both the UN chief and the Italian leader expressed concern over the grave humanitarian situation in Syria and the acute financial difficulties facing the Palestinian Authority.

They noted that the Arab Spring had underscored the importance of strong leadership and vision, as well as the need to provide the youth with opportunities and strengthen institutions of governance. In addition, Mr. Ban expressed his appreciation for Italy’s continued support to Somalia, Libya and Afghanistan.

The human rights situation inside Syria, as well as the crisis’ regional implications were covered in the Secretary-General’s meeting with US Senator Patrick Leahy, with whom the UN chief also discussed issues related to the UN budget.

In their meeting, Mr. Ban and the President of Argentina, Cristina Fernández, discussed regional developments as well as the situation in the Middle East, with President Fernández raising the issue of the Falkland Islands (Malvinas) – the Secretary-General reiterated that his good offices to resolve this dispute remain available, if both parties are willing to engage.

The UN chief also thanked Argentina for its steadfast support for UN priorities, and expressed his appreciation for the Latin American country’s contribution to peacekeeping in Haiti.

Meeting with King Mswati III, Head of State of the Kingdom of Swaziland, the two men discussed political developments and the human rights situation in the small African nation and efforts to fight HIV/AIDS.

The need to advance consensus on the post-2015 UN Development Agenda and sustainable development – including follow-up to the UN Conference on Sustainable Development (Rio+20), held in Brazil in June – while taking into account the European debt crisis and the current world economic situation, featured in Mr. Ban’s talks with the President of Poland, Bronislaw Komorowski.

The pair exchanged views on the situation in Eastern Europe, the Middle East and North Africa, with the Secretary-General also sought Poland’s support in a number of key areas of international concern, including global education, health and nutrition and food security.

In his meeting with the President of Latvia, Andris Berzinš, Mr. Ban discussed an invitation to visit the Baltic region and UN-Latvian cooperation. The two men also exchanged views on the situation in the Middle East.

New campaign aims to give ‘Big Push’ in support of UN Every Woman, Every Child initiative 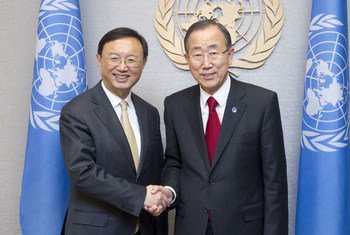