25 September 2012
In his speech to the United Nations General Assembly’s high-level debate today, the President of Afghanistan, Hamid Karzai, highlighted his nation as a testament to the “benefits of multi-lateral cooperation and international solidarity,” while also calling for international anti-terrorism efforts involving his country to be taken to their sources.

“It was a little over a decade ago when many countries from across the world joined the Afghan people in our struggle for peace and against the forces of extremism and terrorism. At the time, Afghanistan was a country decimated in all regards,” President Karzai told the Assembly’s General Debate, which started at UN Headquarters in New York today.

“For decades, we had suffered unnoticed from violence, deprivation, and from sinister foreign interference,” he added. “Long before terrorism struck the world as a common security threat, Afghans were the victims of the atrocity of terrorist networks from different parts of the world that had made Afghanistan their haven.”

Afghan authorities are currently working with the international community so that by 2014 they can assume full responsibility for security in all of the country’s 34 provinces. They are also working towards taking greater ownership of development in a country where more than one-third of the population lives below the poverty line, and one in every two children under five is chronically malnourished.

The United Nations has a Security Council-mandated political mission in the country – the UN Assistance Mission in Afghanistan (UNAMA) – focussed on two main areas of activities: political affairs and development and humanitarian issues.

In his statement, President Karzai flagged Afghanistan’s transformation over the past decade, noting that democracy has taken root, health services are accessible to the majority of the population, and millions of students – boys and girls – are enrolled in primary and higher education.

“Our achievements have not come about easily, and the true aspirations of the Afghan people for peaceful, prosperous lives are yet to be realized,” he said. “As the world's fight against terrorism continues unabated, the Afghan people continue to pay the biggest price any nation has paid – in both life and treasure.”

In relation to terrorism in the Central Asian nation, President Karzai noted that terrorism is not, and never was, rooted in Afghan villages and towns, with its sources and support networks existing beyond the country’s borders.

“Therefore, while the international community's security is being safeguarded from the threat of terrorism, the people of Afghanistan must no longer be made to pay the price and endure the brunt of the war,” he said.

He added, “It is in deference to the immense sacrifices of the Afghan people, and the precious lives lost from the international community, that the campaign against terrorism must be taken to the sources of terrorism and must be result-oriented.”

The President stated that, with peace being the “utmost desire” of the Afghan people, the country’s authorities have initiated a peace and reconciliation process which aims to bring all elements of the country’s armed opposition into society. He reiterated that his “hand of peace and reconciliation” remains extended not only to the Taliban, but also to all other armed opposition groups that wish to return to “dignified, peaceful and independent lives in their own homeland.”

“What we ask of them in return is simple: an end to violence, cutting ties with terrorist networks, preserving the valuable gains of the past decade, and respecting our Constitution,” the President noted, adding that to help facilitate the peace process, he was asking the Security Council to extend its full support to the Afghan Government’s efforts.

“In particular, I urge the 1988 Taliban's Sanctions Committee to take more active measures towards delisting of Taliban leaders as a step to facilitate direct negotiations,” he added.

The Afghan leader also cited the role that neighbouring Pakistan could play in his country’s path to peace, noting its implications for Pakistan's own security, and the security of the wider region and beyond.

“We are deeply committed to our brotherly relations with Pakistan, but are aware of the challenges that may strain our efforts at building trust and confidence,” President Karzai said. “Such incidents as the recent shelling of Afghan villages risk undermining the efforts by both governments to work together in the interest of our common security.”

Other issues covered in President Karzai’s statement to the General Debate included religious intolerance, the situation in Syria, the plight of the Palestinian people and UN reform.

Afghanistan’s President is one of scores of heads of State and government and other high-level officials presenting their views and comments on issues of individual national and international relevance at the Assembly’s General Debate, which ends on 1 October.

President Karazai also met with Secretary-General Ban Ki-moon on Tuesday. The UN chief congratulated him and the Afghan people on the clear, strong message from the international community of its continued commitment to Afghanistan after 2014, as elaborated over the past four months at a NATO Summit in Chicago, a Kabul Ministerial meeting and a conference in Tokyo.

Mr. Ban said the international community and Afghanistan must now work together to ensure that the mutual commitments made at those events materialize so as to bring tangible benefits to the people of Afghanistan. He also highlighted the importance of a sound political transition, including in terms of the next Afghan polls, progress on peace and reconciliation and regional cooperation – processes on which the United Nations stands ready to support. 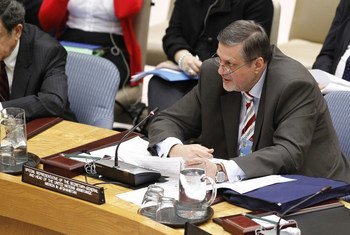 20 September 2012
Afghanistan is moving forward in the transition to greater ownership and responsibility for its affairs but faces a number of challenges, including generating a perception of greater security for ordinary citizens and addressing human development needs, the United Nations envoy to the Central Asian nation said today.