25 September 2012
Effective and inclusive multilateral action is vital to tackle the world’s most urgent challenges, including the global economic crisis, climate change and conflict, the President of Slovakia, Ivan Gašparovic, told the United Nations General Assembly today in New York.

“Slovakia is prepared to intensively and constructively cooperate with partners in order to maximize the effective functioning of the UN system in economic, social, environmental and other areas,” President Gašparovic in his statement to the 67th Assembly’s General Debate, which began today.

The Slovak President is one of scores of heads of State and government and other high-level officials who are present their views and comments on issues of individual national and international relevance at the General Debate, which ends on 1 October.

“Conflicts do not stop at borders. The world we live in is so much intertwined that every problem is a problem of all of us, every threat is a threat to all of us, but every success will also bring benefits to all of us,” he said. “We need strong multilateralism.”

President Gašparovic noted that the areas of peacekeeping and peacebuilding are integral parts of conflict prevention worldwide, adding that Slovakia supports the strengthening of cooperation between the United Nations and international organizations such as the European Union and the North Atlantic Treaty Organization to improve crisis management in conflict areas.

“Wherever in the world human lives are at risk, the international community should be prepared to take resolute actions,” he said.

He further outlined three aspects to improve peacekeeping mission worldwide which consist of: increasing cooperation among UN mission, developing regional and national instruments for the security sector reform to strengthen the protection of civilians, and preparing a strategy to better transition from peacekeeping to peacebuilding.

President Gašparovic reiterated his country’s commitment to provide peacekeeping troops, noting that the Afghanistan remains the top-priority foreign military operation for Slovakia. In addition, Afghanistan is one of Slovakia’s top three recipients of its development assistance, he said.

The Slovak leader also underlined the need for multilateral action in the areas of arms trade, nuclear disarmament, and sustainable development.

“We believe the key to resolving global problems of today’s deeply intertwined world is an inclusive effective multilateralism,” he said. “No regional organization can alone respond to, or defend against them [global threats] effectively.” 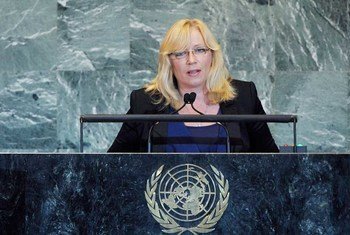 24 September 2011
Nationalist or populist policies are not the answer to the debt crisis engulfing many European countries, Slovakia’s Prime Minister told the United Nations today, urging governments on the continent to ensure their actions do not jeopardize the cause of greater European integration.