“Half of Earth’s population lives in so-called ‘shared’ or ‘joint’ water catchment areas,” he said in his statement to the Assembly’s General Debate.

“The same river provides the water supplies for two, three or more countries,” he continued, adding that cooperation between countries on water-related issues was “a daily obligation” as the absence of it could lead to “the emergence of supply, social, health or even war tensions.”

President Áder further underlined the importance of controlling water pollution as part of allaying tensions between countries, especially in a world where, he noted, more than one billion people remain without access to potable water and 1.5 billion live in river basins where water usage is higher than the minimum level at which it can be replenished.

He highlighted Hungary’s own approach to water conservation and waste water management, and pointed to the new Constitution of Hungary as an example of a document enshrining the basic rules of international law as well as the so-called third generation of human rights, including the right to natural resources.

“Hungary treats the issue of water and sanitation as one of the most important questions of the 21st century,” President Áder stated, adding that Hungary has been an active participant of the UN-sponsored Friends of Water working group.

“We have ample work waiting for us during the coming years. We are ready and willing to share our knowledge,” he stated.

President Áder’s remarks come on the opening day of the General Debate, which will continue for another week and during which scores of the world’s heads of State and government and other high-level officials are presenting their views and comments on issues of individual national and international relevance. 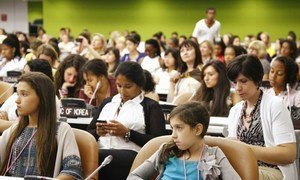 The creation of green jobs is essential to ensure a sustainable future, United Nations officials stressed today at a forum held at the Organization’s Headquarters in New York aimed at giving young people a platform to voice their concerns, experiences and ideas to tackle youth unemployment.