Underscoring his country’s commitment to peace and democracy, Pakistan’s President Asif Ali Zardari told the United Nations General Assembly today that his country had undergone “unprecedented reforms,” while also recalling the country’s many difficulties in achieving them.

“Our democracy has brought about many changes,” President Zardari told the 67th General Assembly on the first day of its annual General Debate. He noted that the “gifts of democracy” in Pakistan included wide-ranging social reforms, the creation of the first social safety net for the country’s poor and a flourishing civil society, as well as enhanced rights for women and the poor.

He also voiced the hope that his administration would be the first civilian government in Pakistan’s 66 year history to complete its full, five-year term.

However, remembering Pakistan’s long and tortured relationship with authoritarianism and terrorism, President Zardari also reminded the gathered delegates that his country’s current troubles were “a product of dictatorships.”

“These dictators and their regimes are responsible for suffocating and throttling Pakistan, Pakistan’s institutions, and Pakistani democracy,” he stated, as he held a photograph of his deceased wife, the former Pakistani President Benazir Bhutto, who was assassinated in 2007.

President Zardari also linked Pakistan’s strides towards democracy and peace to its role at the United Nations which, he said, necessitated reform to better reflect democratic principles.

“The UN represents our common aspirations for peace and development,” he said. “However, it needs reform. The UN system must become more democratic and more accountable. Reform should be based on consensus and democratic principles.”

Turning his attention to regional issues, President Zardari affirmed Pakistan’s resolve to support the rights of the people of Jammu and Kashmir – a disputed border area between Pakistan and India, which has long been the subject of contention for both countries.

“Kashmir remains a symbol of the failures, rather than strengths of the UN system. We feel that resolution of these issues can only be arrived in an environment of cooperation,” he stated.

He also acknowledged that Pakistan’s friendship with its northern neighbour, Afghanistan, had begun to deepen and urged the international community to remain committed to the three million Afghan refugees who have fled the violence there.

Along with President Zardari, scores of the world’s heads of State and government and other high-level officials are presenting their views and comments on issues of individual national and international relevance at the Assembly’s General Debate, which ends on 1 October. 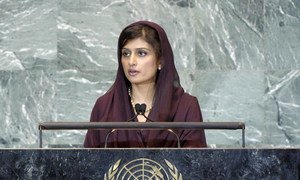 Pakistan has suffered at the hands of terrorists like few countries have, its Foreign Minister told the General Assembly today, stressing her Government’s firm commitment to defeating this scourge and calling for enhanced cooperation at the global level.