The input and participation of the world’s citizens will be key to charting the global development agenda beyond 2015, the target date for the achievement of the anti-poverty targets known as the Millennium Development Goals (MDGs), top United Nations officials stressed today, adding that the most vulnerable populations need to part of this process.

The panel, which held its first meeting today, is tasked with providing recommendations on a global agenda following 2015, the target date set for the achievement of the eight MDGs related to poverty alleviation, education, gender equality, child and maternal health, environmental stability, HIV/AIDS reduction, and a ‘Global Partnership for Development.’

“Together we are embarking on a journey with profound implications for the well-being of the world’s people – and in particular billions of the least privileged and most vulnerable members of the human family,” Mr. Ban told the panel, which is chaired by Indonesian President Susilo Bambang Yudhoyono, Liberian President Ellen Johnson Sirleaf and British Prime Minister David Cameron.

Mr. Ban stressed that giving voice to those who are currently struggling politically, economically and socially will be key to implementing a new development course.

“How shall we reflect the hunger for political inclusion and democracy that we are seeing in the Arab region and elsewhere? People want a meaningful voice in their societies,” he stated.

Speaking during an event on the post-2015 development agenda held on the margins of the General Assembly’s high-level General Debate, the Administrator of the UN Development Programme (UNDP), Helen Clark, said that if people are heard and respected they will be more likely to help deliver a successor framework to the MDGs.

To secure citizens’ involvement, UNDP is undertaking a public consultation in more than 50 developing countries, to ensure their views underpin the design of the new development agenda.

In addition, the UN is employing new technologies to hold a ‘global conversation’ with citizens around the world, asking them what kind of world they want to live in and what actions should be taken, UNDP said in a news release.

“We hope that an ambitious post-2015 development agenda can be established, aimed at eradicating poverty in all its dimensions and providing a green, inclusive and equitable future for all,” Miss Clark said.

“While the findings of the high-level panel will be vital, the priorities of citizens, civil society groups and independent experts must also inform the design of a renewed agenda.”

To build on the momentum of today’s event, national-level dialogues are being organized in at least 50 developing countries, covering governance, health, education, jobs and other key issues initiated by the UN Development Group.

Miss Clark said UNDP would continue to prioritize support for countries to achieve the MDGs, including by rolling out the MDG Acceleration Framework, which more than 40 countries have employed since 2010 to identify and implement actions to overcome bottlenecks and accelerate progress towards lagging targets.

The event, which was chaired by Japan, involved members of the Secretary-General’s high-level panel, as well as various development representatives from Member States and regional institutions.

The high-level panel, which consists of 27 members, is expected to submit its recommendations to the Secretary-General by 31 May 2013. Yesterday Mr. Ban announced the appointment of Izabella Teixeira of Brazil to serve on the panel, replacing Vanessa Perelli Corrêa who recently submitted her resignation. 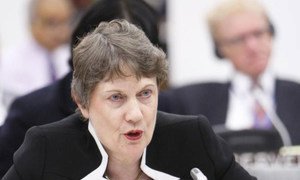