“There is no question that the world we live in today is in much better condition than the one in the 20th century. Freedom has spread. The threat of nuclear holocaust is receding significantly. There is no prospect of a world war, the kind of which twice wrecked the 20th century,” President Yudhoyono told the gathered delegates at UN Headquarters in New York during the first day of the Assembly’s General Debate.

“However, it is only relative peace. Not total peace as yet,” he warned, noting that the world had moved on from the Cold War to “an era of warm peace.”

Underlining the concept of a “warm peace,” President Yudhoyono said that the global security architecture still reflected 20th century circumstances; that questions on how emerging powers would be accommodated by the existing world order continued to go unanswered; and, that old rivalries and long-standing conflicts – such as the Arab-Israeli conflict, disputes in the South China Sea, and tensions on the Korean Peninsula – still risked resurfacing.

“The first thing we have to do is to evolve a new strategic mindset,” he stated. “The remnants of Cold War mentality still persist in parts of the geopolitical landscape – not least our own UN, where rigid, dogmatic, zero-sum calculations sometimes still come into play.”

In order to usher in a new mental approach in dealing with the world’s most complex issues, President Yudhoyono stressed that Security Council reform must continue unabated until the Council reflected the 21st century strategic reality.

He also urged the creation of “a universal culture of mutual tolerance and mutual appreciation” of religious differences and called for the establishment of an international body “to effectively prevent incitement to hostility or violence based on religions or beliefs.”

In addition, he encouraged the doctrine of strong regionalism and pointed to the successes of the Association of Southeast Asian Nations (ASEAN) – the regional body of which Indonesia is a part.

Pointing to the growing need for preventive diplomacy, President Yudhoyono argued that robust regional entities helped resolve simmering disputes before they escalated into full blown conflict and said that ASEAN had done just that in the South China Sea.

“The territorial and sovereignty disputes have been festering there for the better part of a century,” he said. “But we are managing them with restraint, confidence building and, at present, through earnest negotiations toward a legally binding Code of Conduct in the South China Sea.” 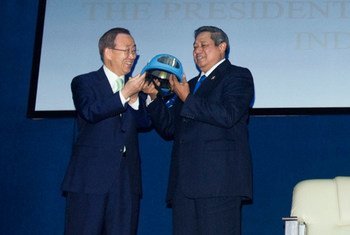 20 March 2012
Secretary-General Ban Ki-moon today hailed Indonesia’s regular contribution of troops to United Nations peacekeeping missions as a remarkable expression of international solidarity on peace and security, noting that the country’s president is himself a former blue helmet.