25 September 2012
The United Nations and its partners today stressed that stronger actions and commitment are needed from world leaders to prevent conflict-related sexual violence and to secure justice for survivors of gender-based crimes.

“In conflict zones, women are disproportionately affected by sexual and gender-based violence, forced displacement, the destruction of civilian infrastructure and rights violations,” said the Executive Director of the UN Entity for Gender Equality and Empowerment of Women (UN Women), Michelle Bachelet.

“Access to justice means more than punishing the perpetrators. It means redress and reparations that enable women to recover losses, alleviate poverty and become full and equal members of society,” Ms. Bachelet told attendees at a high-level panel on sexual violence prevention held on the margins of the 67th session of the General Assembly in New York.

“For too long, conflict-related sexual violence has been largely ‘cost-free’ for those who rape women, children and men, whereas the cost and stigma have been borne by the victims,” said Ms. Bangura, stressing that even as survivors receive the care and services they require, countries must emphasize that sexual violence is not inevitable, but that the consequences for the perpetrators are. “This scourge can and must be eradicated.”

Representatives from Member States, UN agencies and more than 30 non-governmental organizations took part in the discussion, which also drew the participation of women Nobel Peace Laureates Shirin Ebadi from Iran, Leymah Gbowee from Liberia and Jody Williams from the United States.

“Survivors of sexual violence are brutalized twice – first, by the perpetrators of the crimes against them, and the second time, by governments that fail to apply the rule of law and ensure justice for the survivors,” said Ms. Williams, who is co-chair of the International Campaign to Stop Rape & Gender Violence in Conflict.

“As a movement representing civil society around the globe, we are calling on governments to do the right thing – and take immediate action that will bring justice to survivors.”

To support the Secretary-General’s campaign to end violence against women, UN Women and the UN Development Programme (UNDP) will host a friendly soccer match tomorrow in New York in which UN officials will play against the team of Bolivian President Evo Morales.

Ms. Bachelet will provide the initial kick-off for the match, which will also support Bolivia’s Year to End all forms of Violence against Women and Girls. 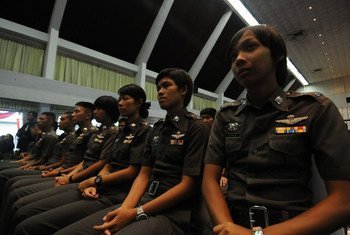 24 September 2012
United Nations officials today urged countries to implement measures to improve women’s access to and participation in justice systems, stressing that the rule of law can help break down gender barriers.