A return to fighting in Sudan’s Southern Kordofan state between Government forces and a rebel group has unleashed a new wave of refugees seeking sanctuary from the violence, the United Nations refugee agency warned today.

A return to fighting in Sudan’s Southern Kordofan state between Government forces and a rebel group has unleashed a new wave of refugees seeking sanctuary from the violence, the United Nations refugee agency warned today.

According to media reports, intense fighting between Sudanese Armed Forces and the Sudan People’s Liberation Army (SPLA-North), including ground assaults and aerial bombardments, has prompted the daily exodus of some 100 refugees to flee into the border town of Yida in neighbouring Unity state.

“As tension is building up again in border areas, we remain extremely concerned about the safety of the refugees in Yida settlement, which is located in close proximity to the border,” Melissa Fleming, a spokesperson for the Office of the UN High Commissioner for Refugees (UNHCR), told a media briefing in Geneva.

“The presence of a refugee settlement in highly militarized border areas close to a conflict zone hampers efforts to preserve the civilian and humanitarian character of asylum,” Ms. Fleming added, pointing out that the safety of the refugees in Yida could not be guaranteed and that UNHCR was working with the refugee community to relocate the settlement to a safer location.

She noted that the continuing violence coupled with an acute lack of food would add to the refugee flow and said UNHCR was anticipating that the Yida camp would swell from its current 64,229 inhabitants to an estimated 80,000 by the end of the year.

Turning to the ongoing crisis in South Sudan’s Upper Nile state, where 23 cases of hepatitis E have been confirmed across the Jamam, Yusuf Batil and Gendrassa camps and 16 fatalities have already been documented, Ms. Fleming voiced concern that some 105,000 refugees could soon be cut off by the rainy season’s heavy downpours and consequent flooding.

The Upper Nile region is largely affected by seasonal rains and is vulnerable to further environmental damage from floodwaters coming from the Ethiopian highlands.

“Many roads are already flooded and may soon become impassable,” Ms. Fleming said, noting that in some areas, up to three kilometres of supply routes were already submerged by 50 centimetres of water.

She also expressed particular concern for the refugees in Doro camp, located near the town of Bunj, where some 75 families have been affected by flooding. The families have been relocated to dry areas, she said, and targeted assistance, such as blankets to children under the age of five, has been provided. Moreover, 14 tons of nutrition assistance reached Doro over the weekend.

There are close to 201,000 Sudanese refugees currently in South Sudan, with more than 170,000 located in Upper Nile and Unity states. They have arrived from Sudan’s South Kordofan and Blue Nile states after fleeing conflict and food shortages over recent months.

UNHCR is currently seeking $186 million in funding to provide the Sudanese refugees with assistance. However, the agency has only received 40 per cent of this amount. 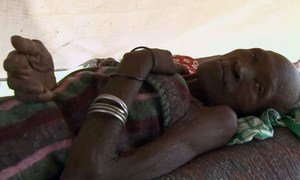 The United Nations refugee agency today voiced alarm about the health situation of more than 100,000 refugees spread out across two states in South Sudan.