IRIN
A young girl and her mother at a displaced persons camp in Vavuniya, Sri Lanka (2009).

25 September 2012
The United Nations today welcomed the closing of a Sri Lankan camp that was once the world’s largest refuge for people displaced from the conflict with 225,000 residents but called for an urgent solution for a handful of people who are still unable to return home.

The United Nations today welcomed the closing of a Sri Lankan camp that was once the world’s largest refuge for people displaced from the conflict with 225,000 residents but called for an urgent solution for a handful of people who are still unable to return home.

“This is a milestone event towards ending a chapter of displacement in Sri Lanka, some three years after the civil war, which ended in May 2009,” the UN Humanitarian Coordinator in the country, Subinay Nandy, said.

“The closure of the camp is a significant sign of the transition from conflict to sustainable peace and the commitment of the Government to resettling tens of thousands of people back to their homes,” he added. “But there are still many people living with friends and relatives particularly in Jaffna and Vavuniya, or living in welfare centres. Some of these people have been displaced for years and they also need a lasting solution.”

Mr. Nandy expressed specific concern for 110 families, comprising some 346 people, returning from Menik Farm to Kepapilavu in Mullaitivu District who are unable to return to their homes, which are occupied by the military.

“A solution urgently needs to be found,” he said. “While these last residents have not been able to return to their former land, the Government is providing them with land in another area. The Government is looking for solutions but it is important that the displaced people should be able to make an informed and voluntary decision about their future, including being part of the planning and management of their resettlement.”

At its peak Menik Farm housed 225,000 people in 700 hectares of land after they were driven from their homes in the fighting that marked the final stages of the civil war between the Government and Tamil separatists. International organizations have been providing basic services such as shelter, food, water and sanitation, schools and primary health care along with other services.

Mr. Nandy called on the Sri Lankan authorities to fully implement the recommendations of the Government-appointed Lessons Learnt and Reconciliation Commission (LLRC) about the rights of people displaced by the conflict.

“Allowing people to settle anywhere in the country and resolving legal ownership of land for those who have resettled away from their original homes is a key part of the reconciliation process,” he said. 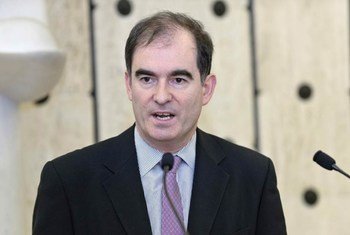 3 August 2012
A senior United Nations relief official today praised the progress made by the Sri Lankan Government in resettling over 440,000 people since the end of the civil war three years ago, and called for continued donor support for the country, where many people still lack basic services.