The United Nations World Food Programme (WFP) is scaling up operations in Yemen, where more than 10 million people – almost half the country’s population – are estimated to need food assistance and the humanitarian situation continues to deteriorate.

“Yemen is sliding into a humanitarian crisis,” the agency said in an update, attributing the situation to high food and fuel prices, rising poverty, a breakdown of social services, diminishing resources, internal conflict and political instability.

The country is particularly vulnerable to rises in food prices since it imports up to 90 per cent of its main staple foods, including wheat and sugar.

According to WFP, child malnutrition rates in the country are among the highest in the world with close to half of its children under five years – two million children – stunted and one million acutely malnourished.

In response, the agency is scaling up its operations, and across all its food assistance programmes is aiming to assist a total of 5.5 million people by the end of 2012. Among those receiving assistance are severely food-insecure households, internally displaced people, refugees, pregnant women, nursing mothers, malnourished children under five years, as well as schoolgirls and their families.

This month, WFP began a massive round of food distributions in response to the situation, with plans to reach 2.2 million people by December.

UN agencies and their partners have requested $584 million for the Yemen Humanitarian Response Plan, of which 48 per cent has been provided to date, according to the UN Office for the Coordination of Humanitarian Affairs (OCHA). 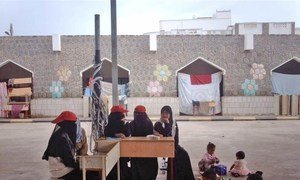 In the wake of a two-day visit, a senior United Nations official today raised concern about Yemen’s humanitarian situation, underscoring the need for strong commitment from the international community to support the millions of people there facing a worsening humanitarian crisis.