UN Photo/SANA
Lakhdar Brahimi, Joint Special Representative of the UN and the League of Arab States for Syria.
24 September 2012

The Joint Special Representative of the United Nations and the League of Arab States on the Syrian crisis, Lakhdar Brahimi, today announced that while the situation in Syria continues to be “very grim,” a solution may be forthcoming.

“There is no prospect for moving forward today or tomorrow,” Mr. Brahimi told journalists following a briefing of the Security Council on the issue. “But I also told the Council that, paradoxically, now that I have found out a little more about what is happening in the country and the region, I think that we will find an opening in the not-to-distant future.”

More than 18,000 people, mostly civilians, have died since the uprising against President al-Assad began in March 2011. In addition, more than 260,000 Syrians have fled to neighbouring countries and an estimated 2.5 million are in urgent need of humanitarian assistance.

Mr. Brahimi recently returned from his trip to the Middle East where he met with President al-Assad to discuss the crisis. He then visited refugee camps in Turkey and Jordan, where he heard first-hand accounts of the struggles facing those who fled the conflict in their homeland.

On Saturday, upon his return from the region, the Joint Special Representative met with Secretary-General Ban Ki-moon to address the violence in Syria and on how to progress towards an inclusive political solution that will address the legitimate demands of the Syrian people

In his press encounter today, Mr. Brahimi acknowledged that while he did not have “a full plan” as of yet on how to tackle the escalating conflict, he planned on returning to Syria soon.

“I’m returning to the region and I have agreed with the Council that I will come back here as soon as I can with more ideas on how we can move forward,” Mr. Brahimi continued. “I refuse to believe that reasonable people do not see that you cannot go backward; that you cannot go back to the Syria of the past.”

Turning his attention to the Security Council’s ongoing deadlock – due to differences over how to proceed, the Council has so far been unable to unite and take collective action to put an end to the crisis – Mr. Brahimi said he was encouraged by the Council members’ interest in the situation and their “generous support” to his mission. He also called on both the Council and the League of Arab States to remain united in their position.

“I said that if I do not represent the entire Council, I’m nothing,” Mr. Brahimi stated. “I need to be seen to represent a united Council and united League of Arab States.”

Addressing the press stakeout, Ambassador Peter Wittig of Germany, which holds the Council’s rotating presidency for this month, said the Council welcomed the opportunity to discuss the situation in Syria with Mr. Brahimi and that the Council members expressed grave concern about the ongoing violence in the country and its humanitarian impact. Furthermore, he reaffirmed the Council’s “full and strong support” for the UN envoy’s mission.

For his part, Mr. Brahimi noted that there was “no disagreement anywhere” that the situation in Syria was getting worse and that the violence had turned into a threat to regional peace and security. Nevertheless, he urged patience. “Please don’t forget that I started just three weeks ago,” he noted. 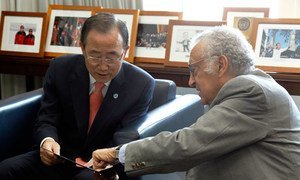 The Joint Special Representative of the United Nations and the League of Arab States on the Syrian crisis, Lakhdar Brahimi, today met with Secretary-General Ban Ki-moon in New York, to brief him on his recent trip to the Syrian capital, Damascus, and the Middle East region.