“Peacebuilding requires great flexibility, and approaches tailored to a given situation. Civilian capacities are crucially important, and we are taking steps to be able to deploy the right experts to the right place at the right time,” said Secretary-General Ban Ki-moon in a news release on the platform, CAPMATCH.

The first participants include Indonesia, South Africa, Morocco, Brazil, Egypt, Benin, Kenya, Thailand and Nigeria – as well as organizations from Norway, Canada, Germany, the United Kingdom, Sweden and Switzerland, which maintain networks of skilled individuals from both North and South.

The principle underlying the platform is one of equal partnership between countries, recognising that there is no single model for institution-building, and that countries may want to look at several different types of experience and adapt these to their own national contexts.

Initial examples of how the platform is being used include Liberia requesting support in implementing its national capacity development strategy, Cote d’Ivoire offering to share its experience of its first post-conflict election process while also asking for further external exchanges to continue to build the functions of its independent electoral commission, and Timor- Leste offering its experience in public finances and oil revenue management, while also requesting expertise in vocational training and job creation.

“I believe CAPMATCH will make a real difference,” said the Special Adviser and Assistant Secretary-General for Civilian Capacities, Sarah Cliffe, in a news release. “I am delighted that such a broad range of Member States and non-governmental organizations (NGOs), two thirds of them from the global South, have already signed up. I encourage more government agencies and civil society organizations to take part – the broader the participation, the more useful CAPMATCH will be.”

The UN is seeking to involve a wide range of partners, including government agencies with specialized sectoral experience, NGOs, and diaspora associations. 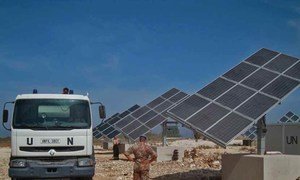 Thousands of United Nations peacekeepers around the world will soon be able to improve their natural resources management through a training programme launched today by the world body's environmental agency.