UN Photo/Mark Garten
Secretary-General Ban Ki-moon briefs the press on forthcoming session of the General Assembly, among other topics.

19 September 2012
World leaders will have a wide range of pressing global challenges to address as they convene at the United Nations next week, Secretary-General Ban Ki-moon said today, as he laid out the agenda for the General Assembly’s annual high-level debate.

“This year’s general debate will be among our busiest ever,” Mr. Ban told a press conference at UN Headquarters, referring to the gathering of heads of State and government that kicks off the new session of the Assembly every year. “This reflects the tumultuous times in which we live – a time of turmoil and transition.”

Over 120 world leaders are expected to take part in this year’s general debate, which takes place from 25 September to 1 October. In addition, Mr. Ban will host a number of meetings on the margins of the debate, including on the rule of law, polio eradication, disarmament, sustainable energy and nutrition. He will also launch a new initiative, entitled ‘Education First.’

The ongoing crisis in Syria, where over 18,000 people, mostly civilians, have been killed since the uprising began in March 2011, will be high on the agenda. “The deteriorating situation in Syria will be foremost in our minds,” said Mr. Ban.

In addition, a series of mini-summits and special meetings will focus on the emergency in Africa’s Sahel region, progress in Somalia, the encouraging transitions in Myanmar and Yemen, instability in the Democratic Republic of the Congo, and relations between Sudan and South Sudan.

Mr. Ban noted that the opening of the Assembly’s sixty-seventh session takes place against a backdrop of widespread violence linked to intolerance.

“I once again condemn those who deliberately provoke others with hatred and bigotry. I also join with others in speaking out against those who, in response to such provocations, fan those flames further still,” he said. “It is time for calm, restraint and responsible political and community leadership.”

Earlier this year, the Secretary-General set out an action agenda that identified five generational imperatives: sustainable development, prevention, a more secure world, helping countries in transition and empowering women and youth. “Next week I will outline where we are and where I believe we need to go,” he stated.

That effort, he said, must include modernizing the UN through a series of reform initiatives. “But most of all, it will require greater ambition on the part of the world’s leaders. I intend to be frank with them about where we are falling short, why people around the world have a right to be impatient, and how we can do better,” said Mr. Ban. 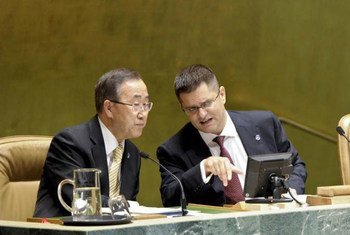