UNHCR/M.Hofer
A Congolese woman, displaced by LRA attacks, carries a bag of non-food items distributed by UNHCR in Dungu, DR of Congo.
18 September 2012

The United Nations today welcomed the handover of 2,500 soldiers to an African Union (AU) regional task force established to hunt down members of the Lord’s Resistance Army (LRA), the rebel group that gained notoriety for its atrocities in Uganda, but which has in recent years extended its violence to neighbouring countries.

“This important moment is the culmination of our collective efforts to put an end to the activities of the LRA, a renegade rebel movement that has become infamous over the years for the untold sufferings wrought upon the local populations of the affected countries,” said Abou Moussa, the Secretary-General’s Special Representative and head of the UN Regional Office for Central Africa (UNOCA).

The LRA carried out the worst of its atrocities in northern Ugandan in the 1990s, but had by 2004 largely been driven of the area through a sustained military effort. However, remnants of the insurgency continued to attack civilians in South Sudan, the Central African Republic (CAR) and the Democratic Republic of the Congo (DRC).

The group is notorious for carrying out massacres in villages, mutilating its victims and abducting boys for use as child soldiers, while girls are forced into sexual slavery.

Two thousand soldiers from the Uganda People’s Defence Force and 500 from the Sudan People’s Liberation Army (SPLA) were officially handed over today in a ceremony in Yambio, located some 50 kilometres from Juba, the capital of South Sudan.

During the ceremony, Mr. Moussa indicated that the UN will continue to support the AU and other partners in the implementation of the regional strategy against the LRA that was adopted by the UN Security Council in June.

He also called for efficient and effective coordination between the regional task force and all stakeholders, including the UN missions and offices, to combat the LRA and provide security to innocent civilians. “Together we will succeed,” he stated.

The ceremony in Yambio follows an earlier one in Obo, CAR, where 360 soldiers of the Forces Armées Centrafricaines (FACA) were handed over to the AU on 12 September. 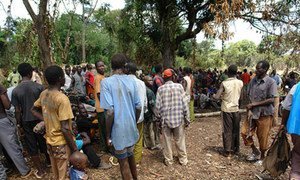 United Nations and African Union (AU) officials will meet in Uganda next week to finalize a comprehensive regional strategy on combating the Lord’s Resistance Army (LRA), the rebel group that gained notoriety for its atrocities in Uganda, but which has in recent years extended its violence to neighbouring countries.