17 September 2012
The top United Nations political official today called on the Security Council and the wider international community to support efforts to develop an integrated strategy to tackle the challenges in the Sahel region of West Africa, which are not only political but also involve security, humanitarian resilience and human rights.

“The deep-seated fragilities stretching across the broad Sahel region of Africa are a matter of growing concern to the people and governments of the region, as well as to the broader international community and this Council,” Jeffrey Feltman, Under-Secretary-General for Political Affairs, told the 15-member body.

“The threats and challenges cut across borders and disciplines and their solutions must be cooperative and comprehensive,” he added.

The region has long been characterized by “cyclical instability and unconstitutional changes of government,” Mr. Feltman noted. The “deeply worrisome” crisis in Mali, which has been beset this year by renewed clashes between the Government and rebels in the northern part of the country, as well as the political instability in the wake of a military coup d’état in March, only served to highlight this.

The region also suffers from extreme poverty, with human development levels among the lowest in the world; porous borders that present “significant” security challenges; and human rights problems, he said.

Mr. Feltman said the integrated strategy will be “comprehensive in scope, preventive in nature, respectful of States’ international human rights obligations, and will build on existing mechanisms in the region.”

The focus of the strategy will be on areas where the UN can best engage on regional or cross-border issues. Mr. Feltman pointed out that one area where the UN can bring added value is the establishment of a forum for regional and international partners to discuss and coordinate their Sahel strategies.

The UN can also provide expertise and support; promote conciliation, mediation and arbitration; and assist in developing regional integrated strategies to tackle challenges such as terrorism and organized crime.

“In implementing all of the above, the strategy will incorporate a human rights-based approach, which encompasses the non-negotiable principles of respect for participation, non-discrimination and accountability,” said the Under-Secretary-General.

The strategy is slated to be presented at a high-level meeting on the Sahel that will be convened by Mr. Ban on 26 September on the margins of the general debate of the sixty-seventh session of the General Assembly. 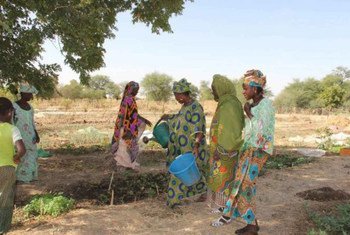 14 September 2012
The growing regularity of droughts across the Sahel region has left millions in need of emergency food assistance, the UN humanitarian food agency announced today, while also warning that malnutrition was still rampant in Senegal, Chad, Niger and Mauritania.