The United Nations Special Coordinator for the Middle East Peace Process today said that the lack of progress between Israelis and Palestinians on the political track and the continuing conflict and occupation put at risk the viability of the two-State solution.

“There is no more sobering a manifestation of such a risk than the financial and economic crisis currently afflicting the Palestinian Authority (PA),” Robert Serry said in his briefing to the Security Council.

Describing the Authority’s fiscal situation as “very grave,” Mr. Serry stated that despite Prime Minister Salam Fayyad’s commendable efforts, he is confronted with the effects of a decrease in foreign aid, the failure of donor countries to fulfil their financial pledges and slowing economic activity.

Amidst a fiscal crisis and related social unrest in the West Bank, the stakes are growing, said the envoy. “The main obstacles remain political: the unresolved issues between the parties, the continued occupation and the ongoing Palestinian divide.

“But we can no longer simply count on the pursuit of short-term mutual confidence-building measures aimed at starting talks. Such measures are not alternatives for a negotiated peace.”

Developments on the ground also do not support efforts to overcome the political stalemate, Mr. Serry said, noting ongoing settlement activity, both settler and Palestinian violence, Israeli military operations in the West Bank, and rocket attacks from Gaza.

He said that in a “volatile and rapidly changing” region, the vision of the two-State solution and the achievements of the Palestinian Authority are elements of stability and progress that should not be lost but rather maintained and realized in full without further delay.

“For one, this means nothing short of unequivocal support by the international community for the PA and collective intensified efforts to address the fiscal difficulties presently faced and preserve the institutional gains made to date.

“Israel also has a special responsibility and interest in ensuring the PA’s viability,” Mr. Serry added. “It is now even more important for the parties to further engage in positive steps, show restraint, and refrain from provocative acts that risk inflaming an already delicate environment.”

He added that Secretary-General Ban Ki-moon sincerely hopes that the Quartet – comprising the European Union, Russia, the United States and the UN – in consultation with the parties, will chart a credible political way ahead in the coming months. 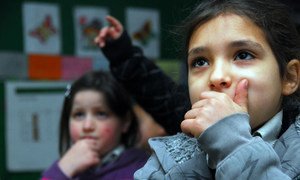