The cultivation of coca bushes in Bolivia decreased by around 12 per cent in 2011, according to a new survey released today by the United Nations Office on Drugs and Crime (UNODC).

The annual survey, jointly produced by UNODC and the Bolivian Government, found that the area under cultivation reached around 27,200 hectares last year, compared to 31,000 in 2010, marking the end of three years of high levels of cultivation of the bush, which is the raw material for the manufacture of cocaine.

In a news release, UNODC Representative in Bolivia, Cesar Guedes, welcomed this positive trend and thanked the Government for its drug control efforts.

Satellite images, plane flights and ground surveys of the largest coca-producing regions revealed that Yungas de la Paz, responsible for two-thirds of Bolivia’s coca production, saw an 11 per cent drop in cultivation while the Cochabamba Tropics registered a 15 per cent reduction and the Northern La Paz provinces witnessed a seven per cent drop.

The Isiboro Sécure national park reduced cultivation by 30 per cent, whereas the Carrasco national park registered only a slight increase of two per cent. Overall, the protected areas of the country recorded a 15 per cent decrease, UNODC said.

Lower production prompted a rise in coca leaf prices by 31 per cent in Government-authorized markets and an estimated 16 per cent in illegal markets, the survey stated.

“Higher prices are making coca more attractive but farmers need viable alternatives if we are to curb illicit crop-growing over the long term,” said Mr. Guedes. 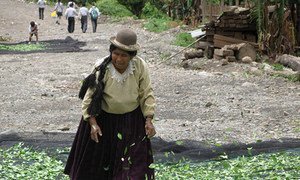 The cultivation of coca bushes in Bolivia has remained stable over the past year with 31,000 hectares planted with the shrub, the raw material for the manufacture of cocaine, according to a new survey by the United Nations Office on Drugs and Crime (UNODC).