UN Photo/Jean-Marc Ferré
Paulo Pinheiro presents report of the Independent Commission of Inquiry on Syria at the 21st Session of the Human Rights Council in Geneva.
17 September 2012

The scale and frequency of gross human rights violations in Syria has significantly increased in recent weeks, according to a new report by the United Nations independent panel probing abuses committed during the country’s ongoing conflict.

The report of the Independent International Commission of Inquiry (CoI) on Syria, which was mandated by the Geneva-based UN Human Rights Council, states that indiscriminate attacks against civilians are now occurring on a daily basis in many areas of the country including Aleppo, Damascus, Dera, Larakia, Idlib and Homs.

“Gross violations of human rights have grown in number, in pace and in scale,” the Chair of the Commission, Paulo Pinheiro, told the Council this morning. “Civilians, many of them children, are bearing the brunt of the spiralling violence.”

Mr. Pinheiro said the report, which is based on the Commission’s investigations and interviews conducted up until two weeks ago, had found reasonable grounds to believe that Government forces and members of the Government-controlled militia known as the Shabiha, had committed war crimes, gross violations against human rights and crimes against humanity.

A confidential list of individuals and units that are believed to be responsible for violations will be provided to the UN High Commissioner for Human Rights, Navi Pillay. However, Mr. Pinheiro said the names would not be publicly released because suspects were entitled to the presumption of innocence and because there is no mechanism in place yet to hold perpetrators responsible where allegations could be contested.

The report also states that the socio-economic situation has further deteriorated, with 2.5 million people in need of humanitarian aid, and more than 1.2 million people internally displaced, half of which are children, according to the Office for the Coordination of Humanitarian Affairs (OCHA).

Mr. Pinheiro stressed that the situation was worsening in part due to the cumulative effect of conflict and economic sanctions. “The Commission maintains that sanctions result in a denial of the most basic human rights to Syrians. Scarcity of basic human needs such as potable water food, electricity, petrol and cooking fuel is causing rampant inflation,” he said.

In addition, Mr. Pinheiro warned that the conflict is spilling over into neighbouring countries, threatening stability and security in the region, and called on the international community to deploy renewed efforts to support the mission of the Joint Special Representative of the UN and the League of Arab States, Lakhdar Brahimi, to stop the violence and find a durable solution to the crisis.

Faysal Khabbaz Hamoui of Syria said the Government regretted that the Commission’s report was “neither accurate nor objective” and that many testimonies in the report have no legal value. He also stated that many international parties are working to worsen the crisis by “instigating the media and training, funding and sending mercenaries to Syria.”

Mr. Hamoui added that Syria had cooperated with all initiatives to settle the crisis but terrorist groups in the country had no interest in reform or democracy and sought only to fragment the Middle East.

During the same meeting, High Commissioner Navi Pillay introduced the report of the Secretary-General on the human rights situation in Syria and called on all parties to immediately stop the violence. She also echoed Mr. Pinheiro’s remarks by urging cooperation with Mr. Brahimi to find a solution to the crisis.

Established in September last year, the Commission has conducted more than 1,100 interviews and has delivered six reports and updates to the Human Rights Council on the situation in Syria. 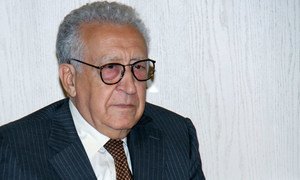 The Joint Special Representative of the United Nations and the League of Arab States on the Syrian crisis, Lakhdar Brahimi, discussed the ongoing violence and worsening humanitarian situation with President Bashar al-Assad during a meeting in Damascus on Saturday.