16 September 2012
On the last stop of a tour of countries neighbouring conflict-ridden Syria, United Nations special envoy Angelina Jolie on Sunday hailed the Iraqi Government's willingness to host those who have fled the violence and said she hoped that all Syrians seeking asylum would be welcomed.

“I want to highlight the noble efforts of the Iraqi Government and the people of Iraq to support Syrian refugees,” said the Hollywood actress, who is also a special envoy for the Office of the UN High Commissioner for Refugees (UNHCR).

“At this juncture, it is critical that Iraq receives urgent international support and continues to welcome refugees across its borders,” she added.

More than 260,000 Syrian refugees have been registered in neighbouring countries since the conflict began in March 2011, according to UNHCR. Earlier this week, Ms. Jolie visited Jordan, Lebanon and Turkey with High Commissioner António Guterres, with both of them pledging continued support and emphasizing the life-saving importance of maintaining open borders and hosting Syrians in need.

More than 18,000 people, mostly civilians, have died since the uprising against President Bashar al-Assad began last year. Amidst reports of an escalation in violence in recent weeks in many towns and villages, as well as the country's two biggest cities, Damascus and Aleppo, UN agencies now estimate that some 2.5 million Syrians are in urgent need of humanitarian assistance.

Ms. Jolie spent Sunday meeting with Syrian refugees in the Domiz camp in northern Iraq. She also met officials of the Kurdistan Regional Government, including the prime minister, the interior minister and the governor of Dohuk. Many of the officials she met were former refugees.

While in the Iraqi capital, Baghdad, on Saturday, the special envoy met with senior government officials and spent time with Iraqis, until recently refugees in Syria, who have returned to Iraq after fleeing violence in their places of former refuge.

Ozone layer on track to recover over next five decades, Ban says on International Day 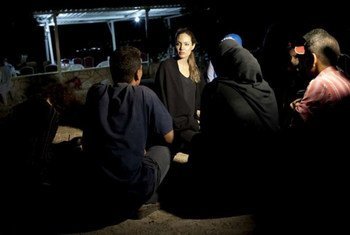 11 September 2012
As the number of Syrians fleeing their country continues to increase, the head of the United Nations refugee agency and that body’s special envoy, Hollywood actress Angelina Jolie, visited a camp in Jordan, where they met some of the of thousands of people that have crossed the border to escape the violence in the Middle Eastern country.