The joint United Nations-African Union Mission in Darfur (UNAMID) has hailed the recent decision by one of the largest armed movements in the Sudanese region to prohibit the recruitment and use of child soldiers.

The Justice and Equality Movement (JEM) agreed, following recent consultations with the UNAMID leadership, to establish an operational mechanism to identify children, who are associated with its forces, for demobilization and reintegration.

It issued an order instructing all its members to “fully adhere to the international and local laws governing the protection of children in armed conflict,” according to a news release issued by UNAMID.

“Child soldiering is detrimental to peace and to children, who are the future of Darfur,” said the Acting Joint Special Representative and head of UNAMID, Aichatou Mindaoudou.

“The Mission applauds JEM's commitment toward protecting children and appeals to all members of armed groups and forces to do the same,” she added.

JEM is one of seven armed movements in Darfur, including the Sudan Liberation Army/Abdul Wahid, to have taken such significant steps, according to the Mission. In July, the Liberation and Justice Movement (LJM), a signatory along with the Government of Sudan of the Doha Document for Peace in Darfur, issued a similar order.

Between 2009 and 2012, the Sudan Disarmament, Demobilization and Reintegration Commission, with the support of the UN, registered more than 1,000 former soldiers in Darfur – which has been wracked with conflict since 2003, pitting Government forces and allied militiamen against rebel groups. 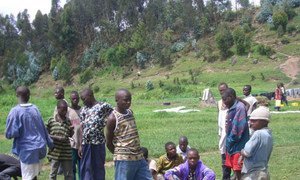 A faction of one of the armed groups in Darfur has agreed to prohibit the use of child soldiers in its ranks after discussions with the joint African Union-United Nations peacekeeping mission in the Sudanese region (UNAMID), the mission reported today.