United Nations Secretary-General Ban Ki-moon is “deeply disturbed” by the recent violence in Libya and elsewhere in the Middle East and has called for calm and restraint to end hostilities, according to his spokesperson.

In a statement issued on Thursday night, the spokesperson said Mr. Ban “condemns the hateful film that appears to have been deliberately designed to sow bigotry and bloodshed,” and stressed that at this time of tensions there is a need for “dialogue, mutual respect and understanding.”

On Tuesday night, the United States Consulate in Benghazi, Libya, came under attack which led to the death of the ambassador to the country, Christopher Stevens and three other diplomats, and left other people injured.

According to initial media reports, those responsible carried out the attack in protest against an anti-Islamic video produced in the state of California by a US citizen.

Demonstrations against the film first erupted in Egypt on Tuesday, when Islamist protesters scaled the US embassy walls in the capital, Cairo, and replaced the flag with an Islamic one. The violence reportedly left more than 200 people injured.

On Thursday, demonstrators in Yemen stormed the US embassy compound, but were unable to break into the main building. The incident led to one death and injured 15 others.

Also on Thursday, the UN Assistance Mission in Afghanistan (UNAMA) issued a statement in which it deplored the film, describing it as “insulting and inflammatory,” and stressing that defamation of religion in all forms is unacceptable. The Mission called on all Afghans to exercise restraint and reject calls to violence or vicious behaviour. 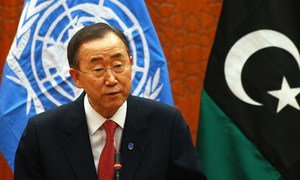