The head of the United Nations agency tasked with defending press freedom today condemned the recent killing of a Syrian journalist, and voiced grave concern over the death of three Eritrean media workers who had been kept in a prison camp for over a decade.

The Director-General of the UN Educational, Scientific and Cultural Organization (UNESCO), Irina Bokova, said she was “appalled” at the killing of Musab Mohamed Said Al-Oudaallah, who is reported to have been killed in his home in the Syrian capital of Damascus on 22 August.

“Once again, I call on all those fighting in Syria to respect the civilian status of reporters and the basic human right of freedom of expression,” she stated in a news release.

Mr. Al-Oudaallah was a journalist for the arts and culture section of the government newspaper Tishreen. According to the non-governmental organization Reporters Without Borders, he also published articles critical of the Government under a pseudonym.

At least 28 local and international journalists have been killed this year in Syria, which has been wracked by violence since an uprising against President Bashar al-Assad began 18 months ago.

More than 18,000 people, mostly civilians, have died since fighting broke out and reports indicate a major escalation of violence in recent weeks in many towns and villages, as well as the country’s two biggest cities, Aleppo and Damascus.

Ms. Bokova also spoke out over the death of Dawit Habtemichael, Mattewos Habteab and Wedi Itay, who were reported to have been arrested separately in 2001 and kept in a prison camp in Eritrea for over a decade.

She urged the authorities to respect journalists’ fundamental rights to freedom of expression and free those detained over issues related to these rights.

“I deplore the detention of journalists in Eritrea, whose only offence is that they tried to exercise the inalienable human right of freedom of expression. I call on the Eritrean authorities to free all such prisoners,” said the Director-General.

“Journalists must be able to perform their duties and keep the public informed without fearing for their lives,” she added. 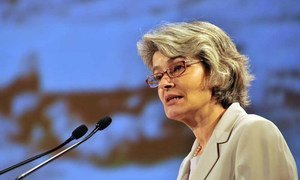 Somali authorities must do everything in their power to put an end to the continuing violence which has already claimed the lives of eight journalists in the African country this year, the head of the United Nations agency tasked with defending press freedom said today, as she condemned the latest killing of a Somali journalist.