The Security Council today extended until the end of March 2013 the United Nations mission assisting Sierra Leone with peacebuilding and long-term development, and called on all actors to ensure that upcoming elections are held in a peaceful, inclusive and credible manner.

The West African nation is scheduled to hold four elections, namely presidential, parliamentary, local council and mayoral, on 17 November – a crucial test for a country that is rebuilding after a vicious civil war that ended in 2002.

In a unanimously adopted resolution, the Council extended the mandate of the UN Integrated Peacebuilding Office in Sierra Leone (UNIPSIL) and requested the mission, along with the UN country team and the international community, to provide assistance to the Government and its electoral, democratic and security institutions in the preparation and conduct of the polls.

It also called on the Government, all political parties and the people of Sierra Leone “to continue to foster an environment that is conducive to the holding of peaceful, inclusive and credible elections, including through open, genuine and inclusive dialogue to address possible differences, and to respect the outcome of the elections.”

Yesterday, the top UN envoy in Sierra Leone, Jens Anders Toyberg-Frandzen, reported to the Council that the major electoral arrangements, with technical assistance from the UN, are on track as is the training of the police and the provision of the necessary logistics.

Mr. Toyberg-Frandzen, the Secretary-General’s Executive Representative and head of UNIPSIL, added that the polls are an opportunity to further consolidate peace and the achievements of the past decade.

“The successful conduct of elections will demonstrate the maturity of Sierra Leone’s political leadership and institutions, as well as the consolidation of the democratic process in the country,” he stated. 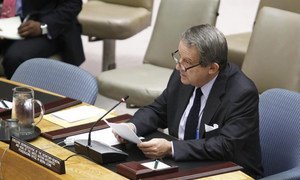 Sierra Leone is making steady progress in rebuilding after a devastating civil war, United Nations officials told the Security Council today, adding that forthcoming elections are an opportunity to further consolidate peace and the achievements of the past decade.