11 September 2012
The United States must adopt new measures to advance a reconciliation process with its indigenous peoples and address historical wrongs that have stopped them from fully realizing their rights, a United Nations independent expert said today.

Mr. Anaya stressed that these measures must “address persistent deep-seeded problems related to historical wrongs, failed policies of the past and continuing systemic barriers to the full realization of indigenous peoples’ rights.”

The Special Rapporteur noted that there are significant challenges, including past misguided Government policies, as well as broken treaties and acts of oppression in the past, which have left indigenous people at a disadvantage and have prevented them from exercising their individual and collective rights.

In his report, Mr. Anaya provides an overview of federal legislation and programs that have been developed over the last few decades by the US Government, and notes that these, “in contrast to early exercises of federal power based on misguided policies, constitute good practices that in significant measure respond to indigenous peoples’ concerns.”

While Mr. Anaya welcomed the new initiatives to advance the rights of indigenous peoples over the last few years, he said existing programmes need to be improved to increase their efficiency and underlined that the UN Declaration on the Rights of Indigenous Peoples is an important guide to do this.

To develop his report, Mr. Anaya held consultations with US officials as well as with indigenous peoples, tribes, and nations in the capital, Washington, D.C., and the states of Arizona, Alaska, Oregon, Washington, South Dakota, and Oklahoma, both in so-called Indian country and in urban areas.

Independent experts, or special rapporteurs, are appointed by the Geneva-based Human Rights Council to examine and report back, in an unpaid capacity, on specific human rights themes. Mr. Anaya is scheduled to present his report on 18 September, during the Council’s current session.

UN chief to visit St. Louis in latest leg of US outreach tour 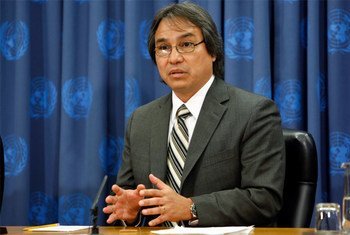 A United Nations independent expert today called on the United States Government and authorities in the state of South Dakota to start consultations with indigenous people on a land sale that will affect a site of spiritual significance to them.