11 September 2012
A top United Nations envoy today stressed the need for more action to prevent violations from being committed against children affected by conflict and for greater accountability for such violations.

“Justice and healing is most effectively achieved through national accountability mechanisms. For this, it is crucial to build national capacity – with international support – so that justice may be administered in accordance with international norms and standards,” said the Secretary-General’s Special Representative for Children and Armed Conflict, Leila Zerrougui.

Addressing the UN Human Rights Council in Geneva, the recently-appointed envoy noted that last year witnessed important positive developments for children affected by armed conflict. The 47-member Council is an inter-governmental body within the UN system responsible for strengthening the promotion and protection of human rights around the globe and for addressing situations of human rights violations and making recommendations on them.

In her statement, the envoy noted that two verdicts passed by the International Criminal Court (ICC) and the Special Court for Sierra Leone this year against a former Congolese warlord, Thomas Lubanga, and the former Liberian president, Charles Taylor, respectively, set important international jurisprudence on the war crime of recruiting and using children.

“These two verdicts send a clear signal to commanders that child recruitment is a war crime and perpetrators will be held accountable,” said Ms. Zerrougui.

“These cases influence and may alter the behaviour, decisions and orders of parties to conflict. Indeed, the possibility of appearing before the ICC is increasingly serving as a deterrent against child recruitment in places where armed conflict is occurring,” she added.

At the same time, she emphasized that international justice cannot replace, but rather complement, national accountability mechanisms, specifically where national authorities are unable or unwilling to bring alleged perpetrators to justice.

“The challenge in conflict-affected developing countries is not always lack of will, but often one of capacity,” the envoy stated, adding that when the political will exists, the burden falls on UN Member States to join forces and ensure that national authorities have the capacity to translate their will and desire for accountability into reality.

Ms. Zerrougui, who took up her post on 4 September, highlighted the complex set of factors leading to child recruitment and the need to strengthen the capacity of Governments to investigate and prosecute adult recruiters before national courts.

She called on Member States to ensure that children and young people are provided with alternatives to recruitment, stressing that education and employment creation should be important components of national strategies to address the stabilization of conflict-affected areas.

In addition, she stressed the need for more long-term and sustainable support for the reintegration of conflict-affected children, including through swift support to the implementation of action plans between the UN and parties listed in the annexes of the Secretary-General Ban Ki-moon’s annual report on children and armed conflict.

The report for 2011, released in June, named 52 parties on its ‘list of shame’ of those who recruit and use children, kill and maim, commit sexual violence or attack schools and hospitals. It included four new parties in Sudan, Yemen and Syria.

On the positive side, Ms. Zerrougui noted that, since last September, five new action plans to halt and prevent the recruitment and use of children were signed, between the UN and parties in the Central African Republic, South Sudan, Somalia and Myanmar. In addition, last month, Somalia’s transitional authorities became the first party to sign an action plan to prevent the killing and maiming of children by its forces.

The signing of action plans is, however, only the first step, she added.

“The action plans signed between the UN and State security forces or armed groups set concrete and time-bound activities for the release and reintegration of children, and provide measures to prevent further recruitment,” stated Ms. Zerrougui. “This concrete and time-bound set of measures must be completed before we can be certain that a protective environment exists for children.” 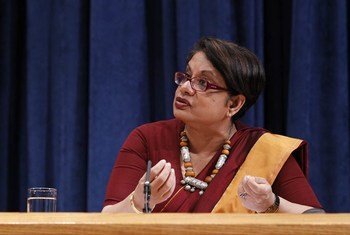 Syria among 52 perpetrators of grave violations against children – UN report

12 June 2012
The United Nations has named 52 parties on its annual ‘list of shame’ of those who recruit and use children, kill and maim, commit sexual violence or attack schools and hospitals, including four new parties in Sudan, Yemen and Syria.