Hassan Sheikh Mohamud was selected as President of the Federal Republic of Somalia on Monday, following a vote which involved two rounds of balloting in the country’s so-called New Federal Parliament in the capital, Mogadishu.

“The selection of the new President brings an end to the eight-year political transition. The Secretary-General congratulates the New Federal Parliament and its Speaker for the peaceful and orderly conduct of the process,” Mr. Ban’s spokesperson said in a statement.

“He also pays tribute to all the signatories of the Roadmap for Ending the Transition for the important role they have played to bring the process to a successful conclusion,” the spokesperson added, while also noting that the UN chief congratulates Mr. Sheikh Mohamud on his selection.

After decades of warfare, Somalia has been undergoing a peace and national reconciliation process, with the country's transitional governing arrangements coming to an end with the selection of a president – a key and final part of the so-called Roadmap for Ending the Transition, which Somali authorities had been implementing.

Monday’s selection marks the culmination of a series of landmark steps contained in the Roadmap. These include the adoption of Somalia’s provisional constitution, the establishment of the New Federal Parliament and the appointment of that body’s Speaker.

“The Secretary-General encourages the new President to move expeditiously, to appoint an inclusive, accountable Government that can begin the work of peacebuilding in the country,” Mr. Ban’s spokesperson said. “He urges Somali and international actors alike to pledge their continued support.”

He added that the UN chief looks forward to the upcoming high-level meeting on Somalia in the margins of the General Assembly later this month, which will be “an opportunity for Somalia’s new leadership to consolidate the partnership with the international community.”

The Secretary-General also thanked his Special Representative for Somalia, Augustine P. Mahiga, and the staff of the UN Political Office for Somalia (UNPOS), as well as the African Union Mission in Somalia (AMISOM) and other stakeholders for their “tireless and dedicated work” in support of the peace process in Somalia.

Earlier Tuesday, Mr. Mahiga and his deputy paid a courtesy visit on President Sheikh Mohamud in Mogadishu, congratulating him and pledging to support the new Somali Government.

According to an UNPOS news release, they also “paid tribute to the integrity and quality of the process, which was both representative and transparent,” and President Sheikh Mohamud indicated that he was looking forward to work with the United Nations.

In a statement on Monday night, Mr. Mahiga said that while much remains to be done in the war-torn country, Somalis can be proud of the transition process that culminated in the selection of a new president.

“The transition is over – Somalia must now focus on stabilization, reconciliation and building sustainable and accountable institutions of governance capable of providing services to its people,” the Special Representative said.

He added, “We salute all candidates regardless of the outcome. I call on the winners to be magnanimous in victory, the losers to be gracious in defeat and for all to lead Somalia forward to a brighter day. All Somalis must now reconcile for the good of the nation at this remarkable moment in the country's history.”

For several years until last year, most of Mogadishu was riven by a fluid frontline dividing the two sides – Al Shabaab fighters and Government troops, with the latter supported by the UN-backed AMISOM forces. Displaced by fighting and drought elsewhere in the country, some 184,000 people have sought humanitarian relief in the city.

Since the Al Shabaab withdrawal from the capital's central parts in August last year, the frontlines have been pushed back to the city's surrounding area. However, the use of roadside bombs, grenades and suicide bombers still take place, as do armed clashes.

Since late May, AMISOM, Government troops and their allies pushed into the Afgooye corridor, outside of Mogadishu, and also gained control of the town of Balad, located within an important agricultural area near the capital. 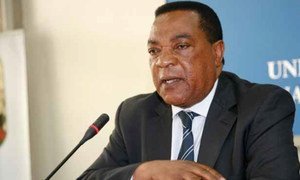 As Somali parliamentarians prepare to elect a new president next week, the top United Nations envoy in the country urged them to choose a credible and effective leader who can advance peace and development in the Horn of Africa nation.