10 September 2012
The United Nations envoy on sport for peace today praised the London 2012 Olympic and Paralympic Games for their contribution to improve societies and effect positive social changes.

“Since they had been awarded the 2012 Games, the London organizers had repeatedly set out their ambition to host Games for everyone,” the UN Secretary-General’s Special Adviser on Sport for Development and Peace, Wilfried Lemke, said in a news release.

He added that the Government of the United Kingdom and the International Olympic and Paralympic Committees and their partners had surpassed their objectives.

Earlier today, Mr. Lemke met Secretary-General Ban Ki-moon in Geneva, where the two men discussed the involvement of the UN system in the Games and the lessons that can be learned for the future.

Various UN agencies took part in this year’s Games, which ended yesterday. The Office of the UN High Commissioner for Refugees (UNHCR), for example, collected sports clothing that was sent to designated refugee camps around the world, and the Joint UN Programme on HIV/AIDS (UNAIDS) held an advocacy event as part of the Africa Utopia Festival.

The UN Educational, Scientific and Cultural Organization (UNESCO), the UN Children’s Fund (UNICEF), the UN Office on Drugs and Crime (UNODC), and the World Health Organization (WHO) also held related events during the Games, and Mr. Ban participated in the Games by taking part in the torch run and carrying the Olympic flag during the opening ceremony.

During their meeting, Mr. Ban and Mr. Lemke agreed to intensify the collaboration between the Paralympic Movement and the UN, in order to continue to advance the rights of persons with disabilities, their inclusion in society and their well-being and empowerment, particularly through the UN Convention on the Rights of Persons with Disabilities.

The Convention is the first legally binding international instrument to address the rights of persons with disabilities, including their participation in sport. The Convention and its Optional Protocol were adopted in December 2006, and entered into force in May 2008. Since then, it has been signed by 153 countries and ratified by 119 of them.

The two UN officials also discussed the importance of future host countries promoting the Olympic Truce, which calls for the cessation of all conflicts during the sports event.

The Truce is based on the ancient Greek tradition whereby athletes, artists, their relatives and pilgrims could travel safely to the Olympic Games and afterwards return home safely. The modern-day version of the Truce has been promoted annually through a General Assembly resolution since 1993, and it was extended to the Paralympic Games for disabled athletes in 2006.

The resolution for this year’s Games was the first time that all 193 UN Member States co-sponsored it and passed it unanimously. However, it was violated by the continued fighting in numerous ongoing armed conflicts around the world.

Mr. Ban and Mr. Lemke agreed to encourage Member States to address the issue during the upcoming meeting of the General Assembly on Sport for Development and Peace, which will be held next month in New York. 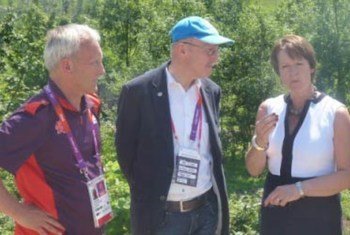 26 July 2012
A senior United Nations official today praised the measures taken by the United Kingdom to ensure that the London Summer Olympic Games are environmentally sustainable.