10 September 2012
Opening the General Assembly’s dialogue on meeting international development goals today, United Nations Deputy Secretary-General Jan Eliasson called for a broad, sustainable and” far-reaching vision” that aimed not only to overcome the recent global financial crisis, but also to create jobs and protect the environment.

“Short-term gain should never occur at the expense of long-term progress,” Mr. Eliasson said, opening – on behalf of Secretary-General Ban Ki-moon – the 2012 session of the annual Development Dialogue that was established to assess progress being made in reaching the eight targets to slash extreme poverty and other global ills by 2015, known as the Millennium Development Goals (MDGs).

The MDGs, agreed on by world leaders at a UN summit in 2000, set specific targets on poverty alleviation, education, gender equality, child and maternal health, environmental stability, HIV/AIDS reduction, and the creation of a 'Global Partnership for Development.'

This years’ dialogue takes its theme, ‘Macroeconomic Policies for the Future We Want,’ from the recent United Nations Conference on Sustainable Development (Rio+20), which took place in June this year in Rio de Janeiro, Brazil. In that light, Mr. Eliasson said it was important to discuss integrated policies that aim at “sustained, inclusive and equitable economic growth.”

For that reason, he added, in planning how to stabilize economies in the short-term and ensure growth in the long-term, policy-makers must make full employment an explicit target, with more resources allocated to that goal as well as education, health and environmental protection.

“These policies can spell the difference between stability and crisis, between prosperity and poverty and even between life and death,” he said.

Also addressing the meeting’s opening, the President of the General Assembly, Nassir Abdulaziz Al-Nasser, said that today’s dialogue will build on the Rio+20 outcome by providing an opportunity to deepen understanding of the inter-linkages between macro-economic policies, sustainable development and the achievement of the MDGs.

“Particular focus is being placed on how macro-economic policymaking can be re-shaped to achieve stability, create employment and decent work, and promote productive capacities, including in the green economy,” he said.

It was particularly important to give full consideration to an effective integration of macro-economic policymaking into the development agenda that must be developed after the 2015 term of the MDG effort, he said.

The Assembly President noted, in that context, that the results of today’s dialogue will feed into the consideration of groups working on a post-2015 development framework: the High-Level Panel on the Global Development Agenda beyond 2015, and the Open Working Group on Sustainable Development Goals (SDGs) – one of the outcomes of Rio+20.

The High-level Panel is part of Secretary-General Ban's post-2015 initiative, mandated by the 2010 MDG Summit, at which UN Member States called for open, inclusive consultations – involving civil society, the private sector, academia and research institutions from all regions, in addition to the UN system – to advance the development agenda beyond 2015.

Rio+20 was attended by some 100 Heads of State and government, along with more than 40,000 representatives from non-governmental organizations, the private sector and civil society, all seeking to help shape new policies to promote global prosperity, reduce poverty and advance social equity and environmental protection.

At the end of the gathering, participants agreed an outcome document which called for a wide range of actions, such as beginning the process to establish SDGs.

Today’s Development Dialogue includes an interactive discussion, moderated by the Assistant Secretary-General for Economic Development, Shamshad Akhtar, as well as a guest lecture by Nancy Birdsall, the founder and President of the Centre for Global Development, a think-tank based in Washington, D.C. 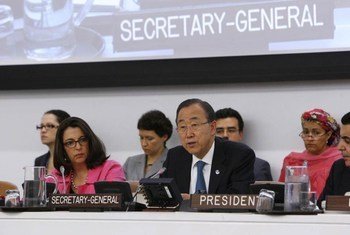 31 July 2012
United Nations Secretary-General Ban Ki-moon today announced the members of a High-level Panel to advise on the global development agenda beyond 2015, the target date for achieving the anti-poverty targets known as the Millennium Development Goals (MDGs).