10 September 2012
As the Human Rights Council began its latest session today, United Nations officials highlighted the many challenges that continue to concern the world body, from the ongoing conflict in Syria and its impact on civilians to broader issues such as discrimination and impunity.

“There is clearly no shortage of human rights challenges which my Office is working on with partners and stakeholders,” the UN High Commissioner for Human Rights, Navi Pillay, said at the opening of the Council’s 21st session in Geneva.

She highlighted numerous human rights challenges that continue to persist and preoccupy the Office of the High Commissioner for Human Rights (OHCHR): poverty, impunity, armed conflicts, refugee flows, discrimination, religious intolerance, arbitrary executions, and the impact of the pervasive economic and financial crises.

“Regrettably, lives and livelihoods continue to hang in the balance,” she stated. “My Office remains vigilant in supporting States in addressing these scourges, doing what it can within limited means to improve conditions that result in far too many human rights victims.”

Made up of 47 Member States elected by the General Assembly, the Council is an inter-governmental body within the UN system responsible for strengthening the promotion and protection of human rights around the globe and for addressing situations of human rights violations and making recommendations on them.

She voiced grave concern about the ongoing conflict in Syria, where more than 18,000 people, mostly civilians, have died since the uprising against Syria’s President Bashar al-Assad began some 18 months ago, citing the continuing “devastating” consequences on civilians.

“I reiterate the call I made at the last session of the Council for the international community to overcome divisions and work to end the violence and human rights violations to which the people of Syria have been subjected and to ensure accountability for all perpetrators,” she said.

Other country situations that also deserved the attention of the Council and her Office include Bahrain, Colombia, Côte d’Ivoire, the Democratic Republic of the Congo, France, Greece, Kenya, the Maldives, Mali, Mauritania, Mexico, Myanmar, Nepal, Pakistan, the occupied Palestinian territory, South Africa, Sudan and Tunisia, she said.

Ms. Pillay also called on the Council to address issues such as gender equality, the targeting of religious minorities and the rising number of executions in some countries.

Also addressing the Council’s opening session today was Secretary-General Ban Ki-moon, who commended the body for its quick response to the crisis in Syria.

“While the Security Council has been divided on the situation, the General Assembly and this Council have acted. I welcome this stepped-up engagement,” he said. “I regret that your recommendations were not followed up by other relevant United Nations organs.”

The UN chief encouraged the Council to maintain its vigilance on Syria, including on the question of accountability. “We must ensure that anyone, on any side, who commits war crimes, crimes against humanity or other violations of international human rights or humanitarian law is brought to justice,” he stated.

The Secretary-General highlighted five challenges that warranted the Council’s attention. They included the need to do more to ensure that the output of the Council and other UN human rights mechanisms shapes policy-making across the Organization, as well as the responsibility of States to protect those who courageously advocate and risk their lives to defend human rights and the values of the UN Charter.

He also stressed the need for the Council to respond to all human rights violations in an even-handed manner, without disproportionately emphasizing any one situation over another.

“Taking a selective approach to human rights violations has the effect of damaging the credibility of the institutions concerned,” he said. “Your efforts must be universal and consistent.” 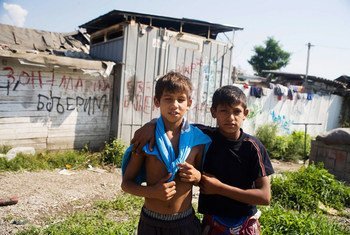 29 August 2012
A group of independent United Nations human rights experts today urged the French Government to ensure compliance with international non-discrimination standards when it comes to the dismantling of Roma settlements and the expulsion of migrant Roma.