UNSMIL/I. Athanasiadis
A lone protester holds up a placard condemning the destruction of a Sufi shrine in Tripoli as he approaches the site of the demolition.
10 September 2012

Three United Nations independent experts today strongly condemned the destruction of Sufi religious and historic sites in various parts of Libya, as well as the intimidation and excessive use of force against unarmed protesters opposing the destruction.

Three United Nations independent experts today strongly condemned the destruction of Sufi religious and historic sites in various parts of Libya, as well as the intimidation and excessive use of force against unarmed protesters opposing the destruction.

“The attacks on Sufi religious sites require a swift and rigorous response by the authorities, without which they are likely to continue and spread,” according to a joint statement from the UN Special Rapporteur on freedom of religion or belief, Heiner Bielefeldt; the UN Special Rapporteur in the field of cultural rights, Farida Shaheed; and the UN Independent Expert on minority issues, Rita Izsák.

“These events amount to the violation of numerous human rights provisions,” they added.

They also urged the Libyan authorities to take all necessary measures to protect places of cultural and religious significance that may also be threatened, and expressed concern at reports that the Libyans authorities did not seek to stop the destruction.

According to the experts, the destruction of Libyan Sufi sites started in October 2011 in the capital, Tripoli, and continued in other parts of Libya this year.

In August, several sites were destroyed, including one of Libya’s most important Sufi shrines, Sidi Abdul- Salam al-Asmar al-Fituri in Zliten, and the Al-Sha’ab Mosque in central Tripoli. Tombs were desecrated and libraries were also targeted.

According to media reports, ultra-conservative Islamists were responsible for the damage, reportedly with the acquiescence of members of the security forces. The sites are revered by Sufis, a branch of Islam known for its moderation but considered heretical by some branches of the Islamic faith.

“Attacks on places of worship and the desecration of cemeteries violate not only the rights of individual believers, but also send an intimidating signal to various communities attached to the places in question,” said Mr. Bielefeldt. “The long term prospects for freedom of religion or belief and religious diversity in the entire country seem to be at stake.”

“These deliberate acts of destruction are attacks on people’s identities, beliefs, their history and their dignity and cannot be tolerated,” added Ms. Shaheed. “Behind these attacks is a desire to eradicate all cultural diversity which reflects our shared humanity.”

On the issue of minority rights, Ms. Izsák expressed her alarm over “the wanton and widespread destruction of important minority religious sites that has taken place before the eyes of the authorities and with no steps to prevent it.”

She also raised concern over the security of minority Sufis in Libya, noting that the destruction “should be an early warning resulting in immediate protection measures for Sufis, and their places of worship, who are evidently at risk of attack.”

Independent experts, or special rapporteurs, are appointed by the Geneva-based human Rights Council to examine and report back on a country situation or a specific human rights theme. The positions are honorary and the experts are not UN staff, nor are they paid for their work.

The UN Educational, Scientific and Cultural Organization (UNESCO) – the UN agency tasked with safeguarding the world’s cultural heritage today – has previously spoken out on the destruction of the sites, with its Director-General, Irina Bokova, calling for a halt to such activities. 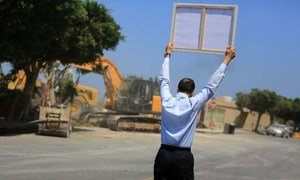 Noting that “destroying places of religious and cultural significance cannot be tolerated,” the head of the United Nations agency tasked with safeguarding the world’s cultural heritage today spoke out against the destruction of various Sufi religious sites in Libya, and called on the perpetrators to cease immediately.