7 September 2012
The United Nations refugee agency announced today it is scaling up its emergency response for internally displaced persons (IDPs) in Syria, with its request for funding in the UN’s revised Syria Humanitarian Response Plan now reaching $41.7 million – more than double the amount sought previously.

“The help we are seeking includes for household items, financial assistance for 200,000 people considered vulnerable, medical assistance, counselling of displaced populations, rehabilitation of shelters and support to encourage refugee and displaced Syrian children to return to school,” a spokesperson for the Office of the UN High Commissioner for Refugees (UNHCR), Adrian Edwards, told a news briefing in Geneva.

The revised Syria Humanitarian Response Plan was presented to donors in Geneva earlier Friday, and is separate from the so-called Regional Response Plan, which applies to relief efforts for Syrians displaced in neighbouring countries. In addition to financial and medical assistance, the $41.7 million in funds is also aimed at providing the Syrian population with access to basic services such as shelter, water and sanitation.

More than 18,000 people, mostly civilians, have died since the uprising against President Bashar al-Assad began some 18 months ago. Amidst reports of an escalation in violence in recent weeks in many towns and villages, as well as the country’s two biggest cities, Damascus and Aleppo, UN agencies now estimate that some 2.5 million Syrians are in urgent need of humanitarian assistance.

Over the past two weeks, UNHCR teams have visited 29 communal shelters in the capital, Damascus, as well as the surrounding district known as Rural Damascus, delivering mattresses and blankets and carrying out counselling, Mr. Edwards said. This week, the agency also participated in a three day inter-agency mission to the city of Homs.

In addition, UNHCR has received tens of thousands of calls to its hotlines since July, and thousands of refugees have approached its offices in the Syrian capital. Last week alone, nearly 3,000 refugees went to the agency’s office in Damascus expressing their concerns about security, financial difficulties and the need for resettlement.

Mr. Edwards said resettlement activities are ongoing, but that they are occurring at a slow pace, as departures to resettlement countries planned this week had been delayed due to cancellation of flights from Damascus’ airport.

The refugee agency is also concerned about relocating people who are living in schools, as the academic year is due to start on 16 September.

“The relocation of people living in schools is urgent,” Mr. Edwards said, noting however that many of the buildings identified as alternative communal shelters need work done before people can be relocated to them.

Addressing the same news briefing, a spokesperson for the UN Children’s Fund (UNICEF), Marixie Mercado, said that the Syrian Government estimates that some 2,072 schools – out of 22,000 across the country – have been damaged or destroyed, and over 600 are occupied by displaced persons. UNICEF is currently supporting repairs in 64 schools in Deraa, Rural Damascus and Lattakia.

Syria’s neighbouring countries are also struggling to deal with the increasing number of refugees as the start of the school year nears, Ms. Mercado said.

In Jordan, it had initially been planned for Syrian children to go to schools, but this proved unfeasible due to the sheer number of children involved. Instead, UNICEF is now working to set up a school in the Za’atari refugee camp, in northern Jordan, and to bring in 15 prefabricated classrooms for Syrian students in the Ramtha camp, in northwestern Jordan.

In Lebanon, schools will accept Syrian refugee children when they open on 24 September and UNICEF will be providing those children with education kits, remedial education, recreational and psychosocial activities. In Turkey, refugee children are being educated in camps set up by the Government, and in Iraq, UNICEF will be providing prefabricated classroom and education supplies, Ms. Mercado said.

Overall, UNHCR has stated that the total number of Syrians who have registered as refugees or are awaiting registration, as of 7 September, stands at 246,267 – with more than half seeking safety in Turkey and Jordan. 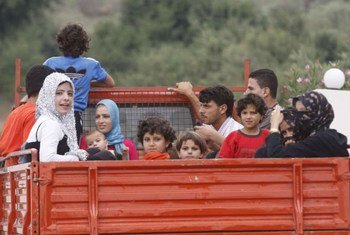 4 September 2012
As heavy fighting continues throughout Syria, the United Nations refugee agency today reported that the number of those fleeing to neighbouring countries rose to over 100,000 in August – the highest monthly total to date.