UNRWA
The stresses of poverty and occupation have badly affected refugee children in the West Bank.
5 September 2012

“Economic expansion last year was accompanied by a decline in real wages and labour productivity and did not succeed in reducing high unemployment, which persisted at 26 per cent,” the UN Conference on Trade and Development (UNCTAD) said today in a press release announcing the launch of its annual Report on Assistance to the Palestinian people.

The report notes that the high economic growth recorded last year through early 2012 is not sustainable because it is tied to reconstruction in the Gaza Strip, following extensive damage from Israeli military activities there between December 2008 to January 2009. Gaza’s local economy grew by 23 per cent in 2011, while that of the West Bank grew by only 5.2 per cent.

Meanwhile, poverty and food insecurity remain endemic, the report notes. “Food insecurity affects two of every three Palestinians in the occupied Palestinian territory, but is most severe in Gaza. Also alarming is the poverty rate in East Jerusalem, estimated at 78 per cent,” according to the UNCTAD release.

A decrease in the agricultural share of the economy from 12 per cent in 1995 to 5.5 per cent in 2011, as well as fiscal-austerity measures put in place by the Palestinian Authority along with drops in donor support do not bode well for future growth, the report states.

However, the report maintains, the real obstacle to growth is the Israeli occupation, which, it says, has almost eliminated marketing and investment opportunities and has constricted land and natural resources available for productive activities.

“All efforts should focus on preventing further encroachment by settlements on and occupation of the Palestinian productive base,” the UNCTAD release states, citing the report’s conclusions.

Among other recommendations in the report are the establishment of an agricultural development bank to share risk, provide credit and insurance, support marketing and post-harvest services and promote investment in needed infrastructure.

In 2011, UNCTAD launched a three-year technical cooperation project to assist Palestinian exporters and importers on a number of levels. 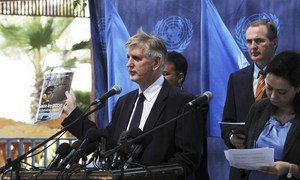 Gaza’s problems in water and electricity, education and health will only get worse over the coming years unless remedial action is taken now, a senior United Nations official warned today.