Secretary-General Ban Ki-moon today appealed to Member States to provide strong and unified support to the new Joint Special Representative of the United Nations and the League of Arab States on the Syrian crisis, Lakhdar Brahimi, as he takes up a “difficult and essential” mission amid an intensifying conflict that shows no sign of abating.

More than 18,000 people, mostly civilians, have died since the uprising against President Bashar al-Assad began nearly 18 months ago. Amidst reports of an escalation in violence in recent weeks in many towns and villages, as well as the country's two biggest cities, Damascus and Aleppo, UN agencies now estimate that some 2.5 million Syrians are in urgent need of humanitarian assistance.

“This is the context in which Mr. Brahimi takes up his duties,” he stated. “I thank him for taking on this task. It is daunting but not insurmountable.

“To succeed, he needs your united and effective support to help the warring parties realize that the solution will not come through arms, but through dialogue that respects the universal rights and freedoms of all Syrians.”

An Algerian national who has served the UN in various high-level roles over the past two decades, Mr. Brahimi assumes the peace-facilitation role which had been carried out since February by a former UN Secretary-General, Kofi Annan, with the aim of bringing an end to all violence and human rights violations in Syria, and promoting a peaceful solution to the conflict. Mr. Annan’s mandate ended on 31 August.

“Solving this crisis was never going to be easy. But it has become more complex with each passing month,” Mr. Ban noted, while also pointing out that the humanitarian situation is “grave and deteriorating” – both in Syria and in neighbours affected by the crisis.

The conflict has taken a “particularly brutal turn,” he added, with Syrian forces continuing their indiscriminate shelling of densely populated areas with heavy weapons, tanks and air assets, and opposition groups having stepped up military activity.

Following today’s meeting, the new Joint Special Representative will go to Cairo for further discussions with the Arab League before proceeding as soon as possible to the Syrian capital, Damascus.

“I appeal to you today to provide solid and unified support to his difficult and essential mission,” said the Secretary-General.

Addressing the meeting, Mr. Brahimi told delegates that he is looking forward to his visit to Damascus in a few days time, and also, when convenient and possible, to all the countries which are in a position to help the Syrian-led political process become a reality.

“The future of Syria will be built by its own people and none other. The support of the international community is both indispensable and very urgent. It will only be effective if all pull in the same direction,” he stated.

At the same gathering, the President of the Assembly, Nassir Abdulaziz Al-Nasser, noted that the 193-member body has chosen not to stay silent in the face of the ongoing killings, massacres and crisis in Syria.

He recalled the resolutions passed by the Assembly in February, June and August, strongly condemning the continued widespread and systematic violations of human rights by the Syrian authorities, as well as its repeated calls on the Syrian Government to end the killings of its own people and for an all-inclusive Syrian-led political process.

“Your calls still stand,” said Mr. Al-Nasser. “Today, we need meaning action. Today, the General Assembly needs to do all that it takes under the UN Charter to help the Syrian people overcome the appalling political turmoil and the terrible loss of lives in their nation.” 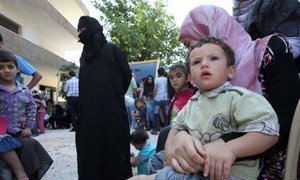 Top United Nations officials today raised the alarm on a deepening humanitarian crisis in Syria, where over 2.5 million people now need urgent assistance and protection, and urged enhanced international support to respond to the growing crisis.