3 September 2012
The worsening conditions and deepening violence in Syria is making it increasingly difficult for displaced civilians to find refuge, the United Nations humanitarian agency said today, warning that insecurity is hampering efforts to provide the population with access to basic services such as food and water and sanitation.

“Civilians – ordinary men, women and children – are bearing the brunt of the violence,” said the UN Office for the Coordination of Humanitarian Affairs (OCHA). “People have been killed in their homes or on the streets as they seek food and other essentials or try to evacuate the wounded. Countless homes, clinics, hospitals and other essential infrastructure have been destroyed. Blockades and curfews imposed on cities such as Homs, Hama, Dera'a and Idlib have prevented people from obtaining water, food and medical supplies.”

More than 18,000 people, mostly civilians, have died since the uprising against President Bashar al-Assad began nearly 18 months ago. There have been reports of an escalation in violence in recent weeks in many towns and villages, as well as the country's two biggest cities, Damascus and Aleppo.

According to OCHA, over 2.5 million people are in need of urgent assistance and protection. However, reaching those in need has become increasingly difficult with mounting insecurity in many parts of the country.

“UN agencies and humanitarian partners report an increase in the number of military checkpoints, roadblocks and road closures, affecting their ability to reach those in need of assistance,” says the agency's latest humanitarian bulletin, calling for increased access to affected areas to provide assistance to vulnerable populations.

In spite of these obstacles, some 310,000 internally displaced persons (IDPs) have received essential items across the country and the World Food Programme (WFP) has dispatched food rations to more than 530,000 people over the last three weeks, with the food agency stating that it will target 1.5 million people this month.

OCHA also warned that pressure is mounting for refugee communities inside Syria, which hosts about half a million Palestinians and one million Iraqis. The UN agency assisting Palestinian refugees (UNRWA), estimates that 225,000 Palestine refugees in Syria are now directly affected by the conflict, and - while many have sought refuge in UNRWA schools - more than 4,000 have fled to Lebanon and Jordan. In addition, some 30,000 Iraqis have returned to Iraq since mid-July.

“Thousands of refugees have contacted refugee outreach volunteers and called

UNHCR hotlines for help and advice,” OCHA said, adding that the Office of the High Commissioner for Refugees (UNHCR) had also reported an increase in the number of cases of threats and harassment against refugees. 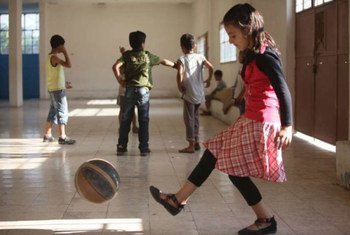 31 August 2012
The United Nations refugee agency is seeing an increase in the number of Syrian refugees arriving in eastern Lebanon's Bekaa Valley, with local charities and authorities reporting about 2,200 people settling in the east over the past week – almost double the recent weekly average, according to a spokesperson for the agency.