31 August 2012
The United Nations Mission in South Sudan (UNMISS) today said it is increasingly concerned by recent violence in Jonglei state that threatens the important gains made this year in restoring peace and security.

“UNMISS is particularly concerned by the apparent emergence in Jonglei of an armed insurgency group linked to the militia leader David Yau Yau, which is believed to be acting in concert with groups of armed youths who have evaded the civilian disarmament operation in the state,” the Mission said in a press statement.

“It is essential to preserve the gains achieved over recent months in the improved security situation in Jonglei and ensure the civilian disarmament process goes forward as a key element of this effort,” it added.

Since the killing of 24 members of the South Sudanese armed forces on 23 August in an attack near the town of Likuangole by assailants said to be loyal to David Yau Yau and allegedly supported by armed youth, further attacks have occurred and civilians displaced from Likuangole town.

The two most recent reported attacks took place 27 and 30 August in Likuangole when unknown attackers twice fired at the South Sudanese Army (SPLA), with the army responding and repelling the assailants. No casualties were reported.

“UNMISS has reinforced its peacekeeping strength in Likuangole and will work with the civilian authorities and the SPLA to help reduce tensions and protect civilians,” said the Mission.

UNMISS is working with partners to contribute to the return of all civilians, who last week fled Likuangole to neighbouring villages. It urges the South Sudanese authorities to take all necessary measures to enable the displaced population to safely return to their homes.

Also today, the Security Council welcomed the progress made by the Governments of Sudan and South Sudan in negotiations under African Union auspices to fulfil their obligations under the Roadmap aimed at easing tensions, facilitating the resumption of negotiations on post-secession relations and normalizing the relations between the two countries.

“The Security Council welcomes [the] significant reduction in violence and tension between the two countries,” the 15-member body said a presidential statement.

It also welcomed the agreement reached by the two countries on oil and related financial arrangements that should help alleviate the “sharply deteriorating economic conditions” affecting them.

“The Council encourages the parties to swiftly finalize the details and the signing of the agreement and move forward with transparent implementation of the agreement, in order for production and transportation to resume as soon as possible.”

The Council also noted with interest the agreement reached by the parties to establish a panel of experts to provide an authoritative, non-binding opinion on the status of the border, and hoped that this process will facilitate a speedy outcome in accordance with the Roadmap. 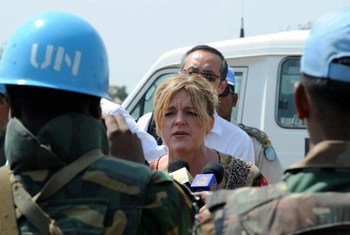 27 August 2012
The top United Nations official in South Sudan today condemned an attack by armed insurgents in the country’s eastern Jonglei state, noting that the violence was a deliberate attempt to undermine the country’s progress towards peace and reconciliation.