The decision by an Israeli judge to dismiss a civil lawsuit brought forward by the family of a deceased young American peace activist is shocking and sad, an independent United Nations human rights expert said today, condemning the ruling as a victory for Israeli impunity.

“This is a sad outcome, above all for the Corrie family that had initiated the case back in 2005, but also for the rule of law and the hope that an Israeli court would place limits on the violence of the state, particularly in relation to innocents and unarmed civilians in an occupied territory,” the Special Rapporteur on the situation of human rights in the occupied Palestinian territories, Richard Falk, said in a statement issued by the Office of the UN High Commissioner for Human Rights (OHCHR).

Rachel Corrie, an American peace activist, was killed in March 2003 while protesting against the demolition of Palestinian homes in Rafah, a city located in southern Gaza.

The details of her death are disputed, with the Corrie family accusing the Israeli Defense Force (IDF) of deliberately crushing her with a bulldozer during the demolition process. For its part, the IDF maintains that the bulldozer operator failed to see Ms. Corrie due to his restricted vision from inside the vehicles’ cockpit and that her death was entirely accidental.

According to Mr. Falk’s statement, despite evidence and eyewitness testimony indicating that Rachel Corrie was in the direct line of vision of the bulldozer driver and was also wearing a bright fluorescent orange vest increasing her visibility, Judge Oded Gershon ruled that Ms. Corrie’s death was “a regrettable accident” in a territory considered by the State of Israel to be “a war zone.”

“The judge’s decision represents a defeat for justice and accountability, and a victory for impunity for the Israeli military,” noted Mr. Falk, who added: “Such a shocking rationale flies directly in the face of the Geneva Conventions, which impose on an occupying power an unconditional obligation to protect the civilian population.”

Mr. Falk also drew parallels between Rachel Corrie’s death and other recent incidents in which the use of Israeli force against civilian populations has caused casualties, most notably the 2008-2009 Gaza War, in which over 1,400 people were killed, and the more recent 2010 Israeli commando assault on Turkish ships filled with activists bringing humanitarian supplies to the blockaded people of Gaza.

“Israeli governmental institutions have consistently embraced impunity and non-accountability in responding to well-documented violations of international humanitarian law and in many cases Israel’s own criminal law,” he said, adding that the Corrie family had been at “the partisan mercies” of the Israeli judicial system whose legal decisions were “a mockery of justice.”

The Corrie family have announced their intention to appeal Judge Gershon’s verdict in the Israeli Supreme Court, Mr. Falk added.

Independent experts, or special rapporteurs like Mr. Falk, are appointed by the Geneva-based Human Rights Council to examine and report back on a country situation or a specific human rights theme. They work in an independent and unpaid capacity.

♦ Receive daily updates directly in your inbox - Subscribe here to a topic.
♦ Download the UN News app for your iOS or Android devices.
Israel|palestin 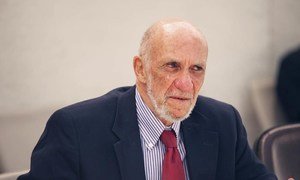 An independent United Nations human rights expert today demanded that Israel immediately stop tearing down Palestinian homes, noting that the number of people affected by the demolition of Palestinian buildings has risen by 87 per cent compared to last year.