30 August 2012
In spite of protection measures by the Guatemalan Government, many children are still victims of sexual exploitation and forced labour, a United Nations independent expert warned today.

“Many children are still victims of sexual exploitation and forced labour in Guatemala despite the laudable efforts carried out to prevent and combat the sale of children for illegal adoption,” said the Special Rapporteur on child trafficking, prostitution and child pornography, Najay Maalla M’jid, at the end of a ten-day visit to the country.

“The phenomenon of sexually exploited girls in prostitution is very worrying, as well as the large number of young mothers that have been sexually abused by relatives and the absence of sexual education that does not inform children of the inherent risks of sexual relations and early pregnancies,” she added in a news release from the Office of the UN High Commissioner for Human Rights (OHCHR).

Ms. Maalla M’jid underlined that it is still difficult to determine the extent of the trafficking and exploitation of children due to the lack of systematic denunciations, as people fear stigmatization and retaliation.

She also noted a lack of access to mechanisms that guarantee rapid protection and security for victims outside the capital, Guatemala City, pointing out that there is a transnational dimension to the issue which translates into using minors for sexual tourism, online pornography and organized crime.

The Special Rapporteur recognized that there have been numerous legal reforms and measures adopted by various actors at a central and local level.

“However, in spite of these efforts and great mobilization, child protection measures are still fragmented due to the overlapping competencies of multiple institutions and the lack of coordination among sectors, as well as the absence of adequate and permanent resources,” she said.

Ms. Maalla M’jid also emphasized that slow judicial investigations and the current impunity enjoyed by many perpetrators impede the rapid and efficient protection of victims and witnesses, and called on the Government to adopt a strategy with a global and integrated focus to guarantee the protection of children who have been victims or are at risk of abuse.

“The strengthening of institutions that are tasked to implement, coordinate and evaluate prevention and protection strategies for children should take advantage of the continued technical assistance of the United Nations and the international community,” Ms. Maala M’jid said.

During her visit to the country, Ms. Maalla M’jid met with Government officials, as well as with representatives from civil society and the private sector. She also talked to young teenagers who have been victims of violence and abuse when she visited child protection centres in the country. 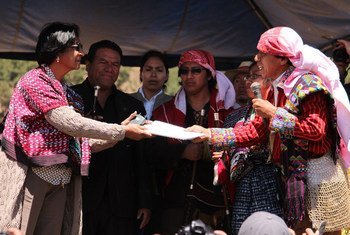 16 March 2012
Guatemala has made progress in the fight against impunity and human rights abuses, but the country must tackle the tremendous challenges that remain to become a State based on democracy and the rule of law, says the United Nations human right chief.