“I am appalled about the level of executions in Iraq. I deeply deplore the executions carried out this week, and am particularly alarmed about continuing reports of individuals who remain at risk of execution,” said the UN Special Rapporteur on extrajudicial, summary or arbitrary executions, Christof Heyns.

“I urge the Government of Iraq to halt immediately the executions,” added Mr. Heyns, who noted that the number of people executed in the country since the start of this year is now at least 96.

The expert has previously expressed to the Iraqi Government his concerns about the imposition of the death penalty, and called for a halt to executions and a review of all death row cases.

He had also informed it of the need for transparency, stringent respect of due process and fair trial guarantees, and the application of the death penalty only for the most serious crimes – namely intentional killing.

“The death penalty may only be imposed, in countries that still have this form of punishment, if a strict set of substantive and procedural requirements are met,” Mr. Heyns underscored.

He noted that the continued lack of transparency about the implementation of the death penalty in Iraq, and the country’s recent record, raises serious concerns about the question of what to expect in the future.

“The arbitrary killing of people, also when it is committed behind a smokescreen of flawed legal processes, is not solely a matter of domestic concern,” he said. “Iraq should take note that the international community will take strong exception to a continuation of its flagrant disregard of the norms applicable to the protection of the right to life.” 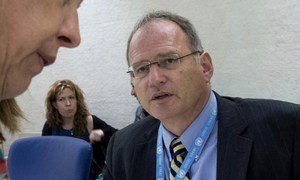 An independent United Nations human rights expert today voiced alarm about reports that Iraqi authorities have upheld death sentences for up to 196 prisoners – in one province alone – and called on the Government to halt its secrecy over executions.