The United Nations top envoy in Iraq today hailed the relocation of another group of 400 Iranian exiles from a camp outside of the capital, Baghdad, to a new location, prior to their eventual resettlement in third countries.

“I welcome the residents’ decision to re-commence the relocation process from Camp Ashraf to Camp Hurriya,” the Secretary-General's Special Representative for Iraq, Martin Kobler, said in a news release issued by the UN Assistance Mission for Iraq (UNAMI), which he also heads.

The issue of Camp Ashraf – located in eastern Iraq and made up of several thousand Iranian exiles, many of them members of a group known as the People’s Mojahedeen of Iran – has been one of the main issues dealt with by UNAMI for more than 18 months.

In line with a memorandum of understanding signed in December by the UN and the Iraqi Government to resolve the situation, some two-thirds of the residents, or 2,000 people, were re-located to a temporary transit location near Baghdad known as Camp Hurriya – formerly known as Camp Liberty – where a process to determine refugee status is being carried out by the Office of the UN High Commissioner for Refugees (UNHCR).

“Three-fourths of the residents, 2,400 persons, have now moved to Camp Hurriya,” Mr. Kobler stated. “I thank them for their cooperation, and call on those remaining in Camp Ashraf to act in the same spirit and start preparations for additional moves without delay, in order to peacefully complete the process.”

The news release further noted that Mr. Kobler requested that the Government of Iraq “be generous” to the camp residents in regards to their humanitarian needs, while also reiterating his appeal to Member States to accept the refugees upon resettlement in their countries.

Prior to today’s transfer, close to 1,300 individuals were still awaiting relocation from Camp Ashraf to the transit centre.

UNAMI staff have been monitoring the human rights and humanitarian situation during the relocation process and provide round-the-clock human rights monitoring at Camp Hurriya. 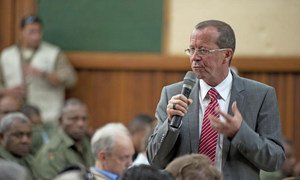 United Nations refugee and human rights officials said today that they have confirmed that the infrastructure and facilities at a new camp in Iraq for residents of the settlement formerly known as Camp Ashraf meet international standards, as stipulated in last month’s agreement on voluntary relocation between the UN and the Iraqi Government.