28 August 2012
The number of refugees fleeing the violence in Syria and seeking humanitarian aid in northern Jordan has more than doubled in the past week alone, the United Nations refugee agency said today, warning that a much larger influx of refugees could be expected in the coming days.

The number of refugees fleeing the violence in Syria and seeking humanitarian aid in northern Jordan has more than doubled in the past week alone, the United Nations refugee agency said today, warning that a much larger influx of refugees could be expected in the coming days.

According to the Office of the UN High Commissioner for Refugees (UNHCR), the amount of registered refugees seeking shelter at the Za’atri camp, in the north of Jordan, has surged to 10,200 people for the seven day period spanning 21 – 27 August, compared to just 4,500 in the previous week.

“Refugees say many thousands more are waiting to cross amid violence around Daraa and we believe this could be the start of a much larger influx,” a UNHCR spokesperson, Melissa Fleming, told a media briefing in Geneva today.

Syria has been wracked by violence, with more than 17,000 people, mostly civilians, killed since the uprising against President Bashar al-Assad began some 17 months ago. Over the past month, there have been reports of an escalation in violence in many towns and villages, as well as the country’s two biggest cities, Damascus and Aleppo. In addition, the conflict has displaced many people, both inside the country and into neighbouring countries.

In her news briefing, Ms. Fleming further noted that some of the Syrian refugees who had made it over the border in recent days reported being targeted by aerial strafing and bombing operations, as well as by shelling and mortars.

“Typically, refugees cross the border at night and are taken straight to the camp by IOM [International Organization for Migration] and the Jordanian army,” she said. “But 1,147 refugees arrived yesterday morning and were followed by another 1,400 overnight and early this morning.”

Pointing to the surge in children as refugees, Ms. Fleming noted that the UN agency had also received an increased number of unaccompanied minors to its camps over the past week.

“Some children report that their parents have died, or are staying behind in Syria to look after relatives, or are working in other countries,” she added. “Some children, who did not have passports, said they were sent ahead of their parents who will follow later.”

In its recent report on the condition of child refugees fleeing the Syrian conflict, the UN Children’s Fund (UNICEF) confirmed that half of the refugees sheltered at Za’atri were, in fact, children.

“The fast pace of arrivals has affected our efforts to improve conditions for the existing population, but work on this continues,” Ms. Fleming said, adding that UNHCR was urgently pitching more tents and expanding the camp.

The refugee agency spokesperson also drew attention to the dramatic increase in the number of Syrians crossing into Turkey, swelling from an initial daily estimate of 400-500 new arrivals to 5,000 people arriving at the Syrian-Turkish border every day over the past two weeks.

“In the past 24 hours, over 3,000 Syrians are reported to have crossed into Turkey, with a further 7,000 expected to cross in the coming days,” she stated, urging an increase in international support to back Turkey’s efforts assisting the refugees as the country prepares to open an additional five or six camps for a total overall capacity of up to 150,000 people.

In the meantime, while UNHCR said that there was no registered increment in the flow of refugees to Lebanon and Iraq, it voiced concern that a new front had been opened in the refugees’ migratory pattern, following reports that seven Syrians had died when the fishing boat transporting them sank off the north coast of Cyprus last week. The boat was carrying four men, one woman, and two children, according to the Cypriot coastguard. 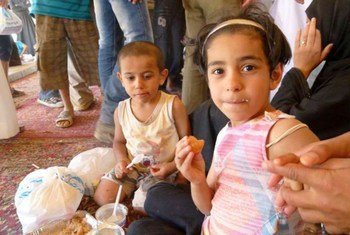 17 August 2012
The humanitarian crisis generated by the ongoing Syrian conflict is rapidly growing as refugees from the Middle Eastern country continue to flee the ongoing violence and spill over into neighbouring areas, the United Nations refugee agency said today.