According to the World Food Programme (WFP), the past several weeks have provided signs of growing distress across the African country with high food prices, empty silos and granaries, and a reduced cereal harvest, aggravating the country’s food security outlook.

“Late and erratic rains, poor agricultural practices, constrained access to inputs, and a reduction in planted area have all contributed to reducing the national cereal harvest by 33 per cent this year,” WFP said in a news release on its Zimbabwe Vulnerability Assessment (ZimVAC). It further noted that a lack of diversified livelihoods and the rising cost of living were combining to create a perfect storm of income and food insecurity.

WFP, in fact, pointed out that according to the ZimVAC, over 1.6 million Zimbabweans will be in need of food assistance during the peak hunger period spanning January to March 2013.

ZimVAC is an annual study conducted by the Government of Zimbabwe in collaboration with UN agencies and non-governmental organisations in order to estimate national food insecurity levels.

In response to the deteriorating food situation, the UN agency announced it was scaling up operations in conjunction with the Government and other stakeholders to provide a combination of food distribution and cash transfers to those in need.

The WFP further noted that it would require approximately $119 million to complete its operations in Zimbabwe until the end of March 2013, though it said that almost three-quarters of the funding has not yet been accounted for.

♦ Receive daily updates directly in your inbox - Subscribe here to a topic.
♦ Download the UN News app for your iOS or Android devices.
food|crisis 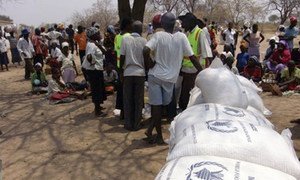 An estimated 1.6 million people are likely to need food assistance in the coming “hunger season” from January to March in Zimbabwe, according to a new report released today by the United Nations and its partners.