IRIN/A. Morland
A Turkana girl waters camels from a hole dug in a dry river bed near Kenya's border with Uganda. Increasing drought has obliged pastoralists to travel further in their search for pasture and water.
27 August 2012

The initiative, entitled Coping with water scarcity: An action framework for agriculture and food security, seeks to encourage practices that will improve water management, such as modernizing irrigation schemes, recycling and re-using wastewater, implementing mechanisms to reduce water pollution, and storing rainwater at farms to reduce drought-related risks, among others.

According to the Food and Agriculture Organization (FAO), which created the framework, drought in some parts of the world has hurt global grain production and contributed to a spike in food prices nearly every other year since 2007, making it essential to focus on the way water is managed throughout the entire food chain.

“There is no food security without water security,” FAO’s Director-General, José Graziano da Silva, said in a speech today at the opening ceremony of World Water Week in Stockholm, Sweden, warning that water scarcity and pollution pose a growing threat to food production around the world.

However, he also noted that food production has great potential to change the ways in which the world uses water.

“Agriculture holds the key to sustainable water use,” Mr. Graziano da Silva said, adding that food production methods that conserve water and use it intelligently hold the key to meeting the world’s growing demand for food.

FAO estimates that of all food produced globally, 30 per cent – the equivalent of 1.3 billion tons – is lost or wasted every year along the value chain from field to fork, making the reduction of water waste crucial to sustainable food production.

Better management of water in agriculture was one of the main issues being examined during World Water Week, an event that brings policymakers and experts from around the globe together to discuss pressing issues related to water and its management.

World Water Week has been convened annually since 1991 by the Stockholm International Water Institute. FAO and the Consultative Group on International Agricultural Research are collaborating partners for this year’s edition, which focuses on water and food security. 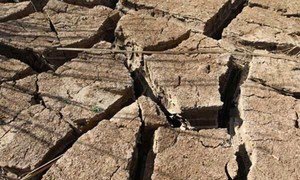 More consolidated efforts to combat the threat of climate change and counter its ripple effects on global food security are needed amid an intensifying global drought and increasing temperatures worldwide, the United Nations declared today.