A group of independent United Nations experts today voiced serious concerns about the “campaign of persecution” by the Bahraini authorities against those working to promote human rights in the country, and called for the prompt release of a prominent human rights defender recently sentenced to three years imprisonment.

“It is time for the Bahraini authorities to comply with the rights to peaceful assembly and expression and immediately release those arbitrarily detained for exercising their legitimate freedoms,” the experts said in a news release issued by the Office of the UN High Commissioner for Human Rights (OHCHR).

They also called for the immediate release of human rights defender Nabeel Rajab, who was convicted on three charges of illegal assembly related to his participation in peaceful gatherings in favour of fundamental freedoms and democracy, including a peaceful protest to denounce the detention of fellow defender Abdulhadi Al Khawaja. Mr. Rajab was recently sentenced to three years imprisonment.

“The sentencing of Nabeel Rajab represents yet another blatant attempt by the Government of Bahrain to silence those legitimately working to promote basic human rights,” said the Special Rapporteur on human rights defenders, Margaret Sekaggya.

“The Bahraini Government must immediately cease its campaign of persecution of human rights defenders in the country,” she added.

He noted that the criminalization of people participating in peaceful assemblies for the sole reason that they did not seek the approval of the authorities to hold such assemblies contradicts international human rights law.

Mr. Rajab is also currently serving three months imprisonment for alleged libel through a social networking site. After a series of postponements, a decision by Bahrain’s Higher Appeal Court on that sentence is reportedly due to be announced today.

“The continuing repression of free speech in Bahrain runs counter to international law and standards that individuals will not be prosecuted for peaceful political speech,” said the Special Rapporteur on the right to freedom of opinion and expression, Frank La Rue.

He added, “The authorities must take all measures to guarantee the free expression of all individuals in Bahrain, whether through social media or otherwise.” 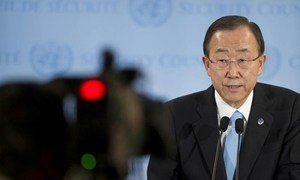 While expressing concern about the situation in Bahrain, Secretary-General Ban Ki-moon today urged the Gulf state’s authorities to resolve the case of Abdulhadi Al-Khawaja, a human rights defender serving a life sentence handed down by a military court on alleged terrorism-related charges, who has been on a hunger strike for eleven weeks.