“The humanitarian situation has worsened since my visit in March,” the Under-Secretary-General for Humanitarian Affairs and Emergency Relief Coordinator, Valerie Amos, told reporters at UN Headquarters in New York, adding that lack of access to those in need and insufficient funding are hampering efforts by UN agencies and their partners to provide assistance.

“We face problems with access to people in need, particularly where there is intense and ongoing fighting, but funding is also holding us back,” Ms. Amos said. “If we had more resources, we could reach more people, especially as we have established solid partnerships with local non-governmental organizations and with the Syrian Arab Red Crescent.”

Syria has been wracked by violence, with an estimated 17,000 people, mostly civilians, killed since the uprising against President Bashar al-Assad began some 17 months ago. Over the past month, there have been reports of an escalation in violence in many towns and villages, as well as the country’s two biggest cities, Damascus and Aleppo.

Last week, Ms. Amos paid a three-day visit to the strife-torn country and Lebanon to see for herself the impact of the intensifying conflict and to discuss ways to increase humanitarian assistance.

“Both those who have fled and their hosts have urgent humanitarian needs due to the widening impact of the crisis on the economy and on people’s livelihoods,” she said.

In particular, the UN official expressed serious concern about the health conditions in schools, which are being used as shelters for displaced persons, and warned of the negative impact that this would have on children when the new school year starts next month.

“There will be a disruption to the education of thousands of children when the academic year begins in September unless other solutions are found to house the internally displaced,” Ms. Amos said.

In her remarks to the press, the Emergency Relief Coordinator also highlighted the work of UN agencies and their partners, which have provided food aid to more than 800,000 people over the past month, and delivered relief supplies, such as hygiene kits, blankets and other basic items, to more than 60,000 people during the first two weeks of August.

“But this is not enough,” Ms. Amos stressed. “Not when we are dealing with the needs of an estimated 2.5 million people.”

The official noted that the appeal by the UN Office for the Coordination of Humanitarian Affairs (OCHA) for $180 million in funds for humanitarian aid in Syria has been only half-funded, and urged international partners to “contribute more generously” to be able to increase assistance.

“We will continue to do everything to support those displaced both inside and outside Syria,” Ms. Amos said, and reiterated her call for all those engaged in the conflict to respect civilians and abide by international humanitarian law. 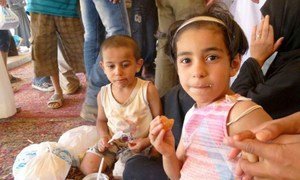 The humanitarian crisis generated by the ongoing Syrian conflict is rapidly growing as refugees from the Middle Eastern country continue to flee the ongoing violence and spill over into neighbouring areas, the United Nations refugee agency said today.