UN Photo/Mark Garten
Secretary-General Ban Ki-moon (left) speaks with Beyoncé during rehearsals in the General Assembly Hall for the recording of the song, “I Was Here.”
17 August 2012

On World Humanitarian Day, United Nations Secretary-General Ban Ki-moon has highlighted the power of individual actions to spark global changes, and praised the work of humanitarian workers who provide assistance to vulnerable people around the world.

On World Humanitarian Day, United Nations Secretary-General Ban Ki-moon has highlighted the power of individual actions to spark global changes, and praised the work of humanitarian workers who provide assistance to vulnerable people around the world.

“This year's World Humanitarian Day presents an historic opportunity to bring together one billion people from around the world to advance a powerful and proactive idea: people helping people,” Mr. Ban said in his message marking the Day, which falls on 19 August.

“From international efforts to avert a hunger crisis in West Africa to urgent assistance to civilians in Syria, to a single good deed from one neighbour to the next, the spirit of people helping people improves conditions for all,” Mr. Ban said. “That is the best way to honour the many fallen aid workers we mourn today, and to celebrate the efforts of others who carry on their noble mission by rushing assistance to those who are suffering.”

The General Assembly proclaimed 19 August as World Humanitarian Day in 2008 to commemorate the 2003 Canal Hotel bombing in Baghdad, Iraq, which claimed the lives of 22 UN staff members, including the world body's top envoy to the Middle Eastern country, Sergio Vieira de Mello, and wounded more than 150 people.

The Day aims to honour those who have lost their lives in humanitarian service and those who continue to bring assistance and relief to millions, in addition to drawing attention to humanitarian needs worldwide and the importance of international cooperation in meeting those needs.

For this year's observance, the UN has launched a global campaign, entitled 'I Was Here,' to engage one billion people through social media so they can pledge a humanitarian action, however big or small, and share their individual actions with others through an interactive website, www.whd-iwashere.org.

“Individual actions may seem small, but collectively they will reverberate around the world, generating unstoppable momentum for a better future,” Mr. Ban said.

Organized by the UN Office for the Coordination of Humanitarian Affairs (OCHA), the campaign is supported by US performing artist Beyoncé Knowles, who along with songwriter Diane Warren, donated the “I Was Here” song to the campaign, recently filming a video clip for the song at the General Assembly Hall at UN Headquarters in New York.

The video will premiere on the Day, with displays on big screens in the cities of Dubai, Geneva, Addis Ababa, as well as in New York City's Times Square, among other locales.

“'I Was Here' says I want to leave my footprints in the sands of time, and that is leaving our mark on the world,” Ms. Knowles said in a special joint interview conducted at the UN Television studios with US journalist Anderson Cooper. “We all want to know that our life meant something and that we did something for someone else, and that we spread positivity no matter how big or how small.”

In the same interview, the Under-Secretary-General for Humanitarian Affairs and Emergency Relief Coordinator, Valerie Amos, said that the Day would help to spread a message of hope and raise awareness of the millions of people helping others around the world.

“This is a day that is both a commemoration, because there are a lot of people who lost their lives trying to help people, but it is also a celebration of the things that people do,” she said. “There is an amazing amount that people do every single day that goes unrecognized.”

In a statement, the UN Resident and Humanitarian Coordinator in Somalia, Mark Bowden, praised the dedication of humanitarian workers, especially in the east African country, where conditions are particularly difficult due to conflict and food insecurity.

“Every day in Somalia, non-governmental organizations and the UN humanitarian agencies work with the Somali people to overcome the effects of drought, hunger and conflict on innocent people,” Mr. Bowden said, adding that aid workers risk their lives daily when doing their jobs. “The dangers are very real. Since the last World Humanitarian day, 19 aid workers were killed and eight others kidnapped in Somalia, four of whom remain in captivity.”

Mr. Bowden called on all parties to respect humanitarian work and allow humanitarian access to people in need. “Whether aid workers are international staff far from their homes and families or national staff working in the community in which they were raised, their only agenda is to help the most vulnerable,” he added.

Echoing Mr. Bowden, the Executive Director of the World Food Programme (WFP), Ertharin Cousin, said it is unacceptable that humanitarian workers face physical violence, intimidation and even death, on a daily basis in certain parts of the world.

“Sadly as the world's largest humanitarian agency, WFP has all too often endured these challenges and more, much more, as a common workplace reality,” she said in a statement.

Over the past year, 12 WFP staff, contractors and partner staff have been killed while working to fight hunger in Haiti, Côte d'Ivoire, Somalia, Sudan, and South Sudan. Others were kidnapped, injured and traumatized by violence directed against them. 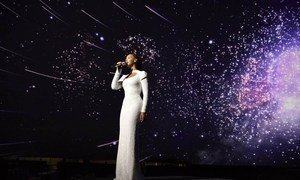 The United Nations campaign highlighting the work of the world’s humanitarian workers has reached 100 million people through social media so far, the world body announced today, describing it as its “first milestone” that gets it closer to the one billion mark, which it aims to reach by World Humanitarian Day on 19 August.